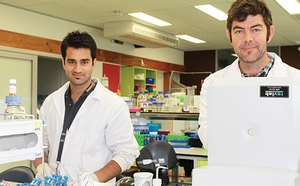 Molecular biologist Alex Hennebry started at Scion in April last year to develop new breeding technologies. He aims to demonstrate that genome editing can be used to introduce specific mutations in conifer genomes. As Alex explains, these techniques can be utilised without the introduction of foreign DNA; they simply take advantage of the inherent DNA repair machinery within cells. The natural system is prone to errors, and the cell essentially mutates itself in a precise and targeted fashion.

“Genome editing has already been performed successfully in a range of organisms,” says Alex “For instance, by targeting two genes in soy beans, the healthy oil content has been increased from about 20 to 80% and the unhealthy, saturated oil content reduced by about 90%. If this was a commercial soy bean variety it would mean less refining costs and a much healthier end product.

“Once I have established proof of concept that genome editing can be used in conifers, we can look at more specific targets. For example, if we can identify a specific gene or genes that control floral development in conifers, this technology should allow these genes to be switched off through targeted mutation. This may one day allow the production of a non-flowering conifer.”

Alex, who completed his PhD (University of Waikato) at AgResearch in Hamilton, has 12 years’ experience in molecular biology. “I’m hoping to complete this project within the allocated two years and use my left over time to investigate other exciting options.”

Wajid Waheed is hoping to fast track the production of diterpenes to use in valuable pharmaceuticals and medicines, by using the humble radiata pine. Diterpenes are a group of plant secondary metabolites with a multi-billion US$ market as fragrances, pharmaceuticals, fuels and chemical feedstock. In nature they have a role in plant defence and are often produced in small quantities by plants that are not easily cultivated; consequently a large number of plants need to be harvested to obtain commercial quantities of terpenes.

“Radiata pine is special, it produces vast quantities of terpenes in its special compartments known as resin ducts where in it stores them without affecting the trees health,” says Wajid. “And the terpenes can be extracted by tapping into the resin beneath the bark in much the same way as rubber or maple syrup.

“Our aim is to prove that this special feature of radiata pine can be used to produce larger volumes of high value terpenes.  As an example, taxol is a diterpene used in cancer therapy. It’s produced, in tiny quantities in the bark of the slow growing pacific yew. If taxol precursors or similar compounds can be produced and extracted from pine resin ducts then this could make cancer treatments more accessible”.

Wajid, who started at Scion in October last year, completed his PhD in Terpene Biotechnology. “I love living in Rotorua, it’s very similar to my home in Kashmir, in northern India. The landscape, rivers, lakes and plants are very much alike. This is a great experience”.

Juan Rodriguez Gamir arrived at Scion’s Christchurch campus from Spain, in May 2013. At first, he admits, it wasn’t easy especially arriving in a city still licking its wounds from a devastating earthquake, but living in Christchurch has proved exciting. “Not everyone gets the chance to experience living in a post-earthquake city and feel how much people want to recover the spirit of their city.”

Juan is working with forest ecophysiologist Dr Jianming Xue studying the mechanisms of water transportation and regulation within radiata pine, particularly when the plants are under stress.

“The control of plant-water relations as the climate changes is important for forest tree species performance and survival in stress conditions” says Juan. “Water moves between cells through membrane channels called aquaporins. These channels control the water movement in the cells and are involved in plant adaptation and tolerance against different stresses.

“We are looking at the function and the physiological significance of aquaporin regulation under water stress in different clones of radiata pine. This new knowledge can help us develop screening tools for early evaluation, and to select clones that can perform better in specific climate and soil conditions. These will be powerful selection criteria for future breeding strategies.”

Juan’s two year contract has recently been extended to July of this year. “I love my work and living in New Zealand because of the beautiful landscape and way of life. And the Scion environment is great, so I am really happy with my decision to come to New Zealand and join Scion.” 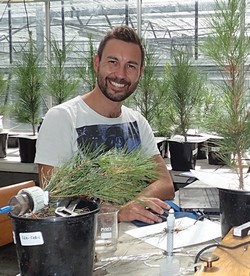