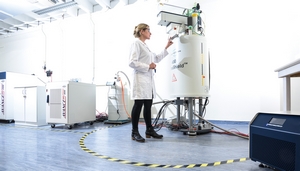 Scion scientists are using transformative wood dewatering technology to investigate new specialty wood products and wood-based chemicals from tree species other than radiata pine. Dewatering uses supercritical carbon dioxide to extract water from wood, resulting in wood that is receptive to further modification. The liquid extracted during this process contains a range of bio-based chemicals that also generate an additional revenue stream.

Until recently, our work in the dewatering field has focused on sapwood and heartwood predominately from radiata pine. Scientists are now turning their attention to other species, and to other parts of the tree that traditionally go to waste – bark, leaves and needles.

As a result, our chemists are making some exciting, and unexpected, scientific discoveries about bark and other tree tissues as a potential source of valuable phytochemicals. Phytochemicals are naturally occurring chemicals that can be used in industrial processes (in some cases displacing petroleum-based chemicals), pharmaceuticals and nutraceuticals.

“Extracting organic components from plant tissues is usually done using traditional organic solvents, and is difficult to scale up,” says Research Leader Dr Stefan Hill. “We used Callaghan Innovation’s extraction equipment to run trials on bark and other plant tissues, such as needles and leaves, using supercritical carbon dioxide as the solvent. This works in much the same way as Scion’s supercritical dewatering plant with the additional capacity to extract other compounds. The results were surprising – and very exciting.

“Further investigation of these extractives here at Scion, using nuclear magnetic resonance and other analytical techniques, has identified a group of chemicals that were previously not easily obtainable. With a high percentage of bark burned for energy or dumped, some valuable chemicals are currently going waste.

“These discoveries offer exciting possibilities in the future for ‘whole-of-tree biorefining’ where virtually none of the tree is left behind in the forest, and the tree’s total resources are more fully utilised. It could lead to the creation of new onshore processing plants for the recovery of high value chemicals in addition to timber and other wood products, from both radiata pine and alternative forest species, including native tree species.”

Some of the phytochemicals recovered are highly functional chemicals that can be used to link polymers together to make bioplastics and bioadhesives, thus providing a source of naturally occurring ready-made polymer precursors.

“Considering just bark for the moment, the volume of phytochemicals extracted using supercritical carbon dioxide and hot water would equate to over 40-50 per cent of the original dry mass of bark,” says Stefan. “These chemicals could be used as sustainable chemical feedstocks for many industries.

“What would be left in the bark after this process is an insoluble residue that is still a valuable source of energy due to its inherent calorific value. This reinforces the whole-of-tree concept.”

We are expanding Scion’s metabolomics platform with some of the latest technologies that will take us to the next step in the development of alternative species extractives and specialty wood products.

Beyond the traditional sapwood and heartwood from the forestry industry, there is a large resource of bark already in existence and the possibilities of what is hidden in leaves and needles are not yet fully explored. Considering the diverse range of tree species available, this equates to a huge untapped potential within the forestry industry.