Storing carbon within the urban environment 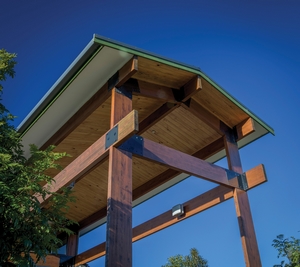 Urban Equilibrium is a strategy to address climate change by using timber-based building materials that sequester and store carbon, and help reduce greenhouse gas (GHG) emissions. The strategy aims at maintaining a balance between humanity and the natural environment, which in New Zealand, is reflected in the traditional Māori kaitiakitanga principles of stewardship.

In 2013, Scion was engaged by Sequal Lumber in Kawerau to evaluate the contribution made by ‘massive timber construction’ technologies to balance urban carbon emissions, within the urban equilibrium model. The use of solid wood technologies and engineered wood products such as cross-laminated timber, glulam and laminated veneer lumber, as opposed to conventional technologies, compounds the amount of timber used in construction, thereby increasing the environmental benefits contributed by wood.

“Urban Equilibrium presents a strategy to help greenhouse gas mitigation while meeting a city’s future growth need,” says Andrea Stocchero, a sustainable architect with Scion’s Built Environment Team. “There is scientific evidence on the carbon sequestration rates of forests and long-term carbon storage rates in timber products. We can therefore calculate the amount of carbon sequestered within the built environment, starting with the volume of timber used in solid timber buildings.

“Evaluating the environmental benefits of using timber in construction is not new, but studies have only been done on single dwellings until now. The novelty of this project is to evaluate those benefits at an urban scale.

“With the move to more, and larger, cities it is becoming more important for the built environment to balance its greenhouse gas emissions. The urban equilibrium strategy allows for future urban development to be considered as a resource to mitigate those emissions. We used Auckland as an exemplar of what is possible.”

About one-third of the country’s population currently live in Auckland with this expected to increase by about one million over the next 30 years. Auckland Council’s Plan also sets a target to reduce the city’s GHG emissions by 40 per cent by 2040. Scion’s research team compared the Auckland Plan’s GHG emission mitigation rate with what could be achieved using urban equilibrium development principles over a 30-year period. Calculations were based on the forecast growth of residential, social and commercial buildings laid out in Auckland Council’s Unitary Plan.

“Our study showed that council could achieve their emissions reduction target 25 per cent faster than planned by applying urban equilibrium to their forecast growth,” says Andrea. “By year 30, sustainably managed forests supporting new urban development would be sequestering carbon at a rate equivalent to 6.6 per cent of Auckland’s 2009 GHG emissions, with the amount of timber needed to sustain this level of growth, providing long-term carbon storage for a further 6.6 per cent.

“Using massive timber technologies would provide other benefits too. For example, substituting building materials would reduce manufacturing emissions by 38 to 65 per cent, and prefabrication would reduce construction emissions by up to 13 per cent. Other emissions savings would be made at end-of-life by landfilling the timber waste or using it as a substitute for fossil fuels to generate energy.

“Our study showed that while there is a need for a top down approach to urban equilibrium from central government, urban decisions can play a significant role in achieving a more sustainable environment.”

Executive Director of Sequal Lumber, David Turner, says the urban equilibrium concept provides an analytical framework to discuss how we urbanise, and elevates the discourse on the structural nature of urbanisation from a set of products to a set of values.

“If we value sustainability, co-existence and intergenerational equity then these values need to be the starting point from which we design how we choose to exist,” says David. “Scion’s research shows that achieving these values and urbanisation do not need to be mutually exclusive, and the use of timber is central to achieving both outcomes simultaneously. Their findings affirm what the timber industry has promoted for some time - that timber means more than wood.”

The case study was completed at the end of 2014 with a scientific paper pending publication.