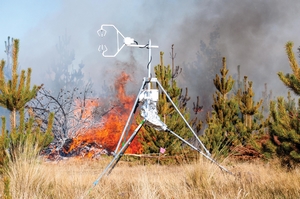 Wilding conifers cover an estimated 1.8 million hectares of land in New Zealand, and are spreading at a rate of about 5 per cent a year. They pose a major threat to our ecosystems, farmlands and conservation estate. While there is an increasing need for wilding control treatments, these are likely to increase the risk of wildfire as sprayed trees die and decompose.

Scion’s Rural Fire Research Team is studying the fire risks and behaviours of wildings and their associated control treatments in order to improve our range of existing fire prediction tools, such as the New Zealand fire behaviour manual and Prometheus fire growth simulation software.

These tools are widely used by rural fire agencies, such as councils, the Department of Conservation, and the New Zealand Fire Service to control wildfires in affected areas. Improved data will help agencies plan the safe use of wilding control treatments without risk to nearby communities.

The research project has been running since 2012, initially as a literature review and desktop hazard assessment. In 2014, our fire scientists, with assistance from rural fire agencies, planned a series of experimental burns in South Canterbury to validate international models for similar tree species, and to obtain data on fuel loads and fire behaviour in both treated and untreated wildings.

Six experimental burns were conducted over the 2015-16 fire season at two adjacent sites near Twizel containing young, open wilding stands, to compare the effects of spray treated versus untreated trees.

“We also collected photos and videos of fire behaviour for further analyses, using ground-based cameras placed in novel fire-proof boxes within the fire, and visual and infra-red aerial imagery collected from a drone hovering above the burns.”

Grant says this is only the first stage of the project, and it is already helping fire managers to understand the sorts of fire behaviour they can expect from wildfires in young wilding affected grasslands.

“The burns have helped us identify the tree spacing and grass continuity required for fires to spread in these fuel types, and when fires can spread as grass fires with the intermittent torching of wildings, as opposed to crown fires in areas with denser cover.

“We have also been able to identify the weather and fire danger conditions under which fire will spread in both sprayed and unsprayed wildings.”

The research team also took the opportunity to explore the use of LiDAR data captured using a drone, to estimate the fuel loads and biomass for different aged stands. If this method proves successful, it will make it easier to assess fuel loads and fire risks, as well as stored carbon, across large tracts of wilding affected lands.

Further burns are required to model fire behaviour across the full range of fuel and fire danger conditions in young wilding trees. Experimental burns will also be conducted on treated and untreated mature wilding stands at a later date.

The rural fire industry has been actively involved in this research, helping to identify suitable burn sites, and providing firefighters and equipment to ensure the experiments are safely managed. Scion’s research also contributes to a broader international understanding of fire behaviour in wilding tree species, and of crown fire development, as well as fire behaviour in health-impacted stands.