Authorities are estimating that it cost over $8 million to put out the fires that claimed over 2000 hectares of Christchurch’s Port Hills1. But this number, which is predicted to rise as final costs come in, could have been a lot larger if not for the expertise of Scion’s rural fire research team who worked 180 hours over two weeks supporting the fire response.

Grant says, “We were able to provide accurate predictions of fire intensity, where it would spread and how fast. After the fire was contained, we continued to use modelling to monitor potential break outs from smouldering hotspots.”

Scion staff were not the only team using our science to help manage the fire response. Rotorua-based company Interpine used techniques developed by Scion for UAVs with infrared cameras to identify and map hotspots that had the potential to flare up and cause the fire to spread again. This is the first time the approach had been applied operationally at a major wildfire in New Zealand.

Fire and Emergency New Zealand Regional Manager Rural, Richard McNamara, was an Incident Controller in the Port Hills fire response. He says, “Scion’s assistance with fire intensity prediction and modelling of fire perimeter growth greatly aided the suppression efforts on this highly complex fire ground. By using the best of wildfire science in both real time and scenario planning, the incident management team was able to finally get ahead of the fire development and put in place suppression tactics which fire crews, heavy machinery and air attack used to finally control this massive blaze.” 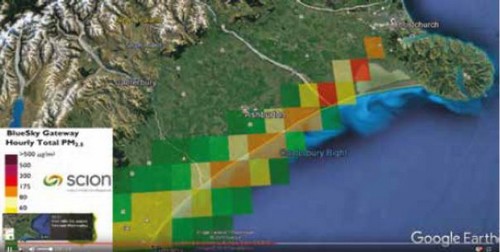 Beyond the fire front, Dr Tara Strand created smoke dispersion models to inform the wider public of likely smoke spread over a 72-hour period. Smoke from wildfires can have a serious health impact for some people, even if they are far from the flames. Her smoke forecasts were able to help vulnerable people and those with respiratory problems to avoid smoke and prevent health problems such as asthma attacks.

Following the fire, Scion has continued to provide advice to Fire and Emergency New Zealand, councils and communities about recovery and ecological planning to assist with the rehabilitation.

February 2017 marked 25 years of rural fire research in New Zealand. In 1990 the National Rural Fire Authority (NRFA) was established and one of its responsibilities was to coordinate research into forest and rural fire management. Along with the Department of Conservation, New Zealand Forest Owners Association and local government, the NRFA worked to establish a research programme at Scion (then the Forest Research Institute). Since the fire research capability was established in 1992, science has been used to improve the art of fire management.

Employed as New Zealand’s first full time fire research scientist Grant Pearce has been on the scene since then. He says, “Our research has focussed on reducing fire risk, being ready to fight it, responding to fire and recovering from it. Now we are preparing for a future with more extreme fires. We can’t stop nature, but we can take precautions and be prepared based on the best science possible.”