In a world first, scientists have completed a draft assembly of the radiata pine genome. This marks the beginning of a new era of precision forestry for a critically important species.

Dr Emily Telfer, who leads the project, says, “The completion of the genome assembly means that we now have an instruction book for how a radiata tree grows, it’s the foundation we need to begin the task of deciphering what each of the base pairs of DNA relates to in physical terms."

At 25 billion base pairs, the radiata pine genome is eight times bigger than the human genome. Following assembly, the next steps are to understand each piece of the genome and the role it plays in tree growth and resilience.

The sheer size of the genome was a large challenge to researchers, including Dr Richard Winkworth from Massey University who helped put the pieces together. Emily says, “This is not the kind of problem we could fix by throwing resources at. We had to come up with a way to segment the genome, process it and put it back together again.”

Armed with this knowledge, the forestry industry could breed trees with their desired characteristics – hastening the current method of selective breeding that can take decades to produce superior trees. Once geneticists understand the genome better, that will all change. “We could breed a whole range of different trees - from construction timber to biofuels.”

Another major advantage will be in mitigating the effects of climate change and disease. As environments alter with the climate, diseases not previously found in New Zealand may establish here and threaten our forests.  Emily says that thanks to genomics we will be able to identify genes with drought and disease resistance and establish them in the wider population much faster.

The genome assembly will also benefit the international scientific and forest growing community. Radiata is the backbone of New Zealand’s forestry industry, but it is also the most domesticated pine in the world and is grown commercially in Australia, Chile, Spain, and South Africa.

The genome assembly began in 2013 with input and guidance from the international conifer genomics community and was completed in September 2017 using Scion’s newly acquired high-capacity computer server – the largest of its kind undertaking genomics work in New Zealand.

The official announcement on the completion of the genome assembly was made at the Forest Growers Research Conference in Christchurch. 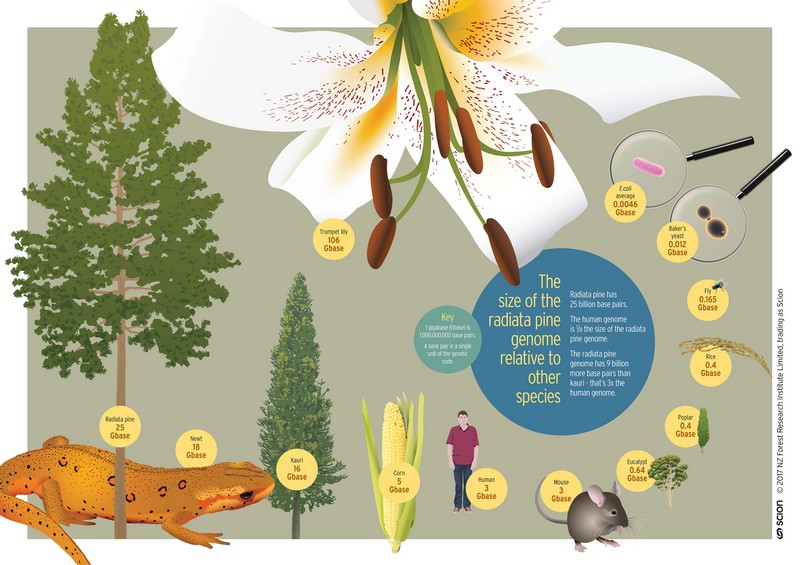