Autumn has been very busy for Scion's Biofuels research team. 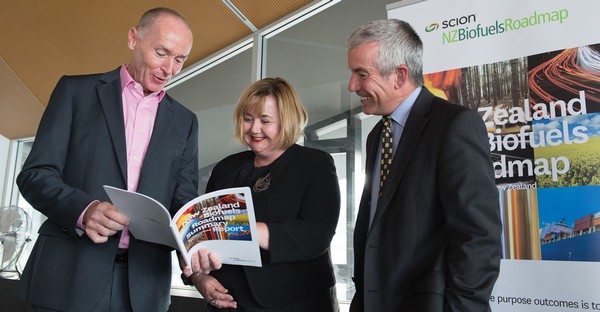 Large-scale biofuel production and its use within New Zealand can happen, according to the Roadmap. The Roadmap does not make recommendations, rather it models alternative biofuelled-futures to inform and stimulate debate on how New Zealand could reduce its dependency on fossil fuels, especially in the heavy transport, marine and aviation sectors.

The project’s technical leader, Ian Suckling, gave a webinar following the launch. Around 70 people logged in to hear Ian talk about some of the more technical aspects of the work. The webinar, organised under the Bioenergy Association of New Zealand’s banner, had one of the association’s highest attendance rates.

At the request of Southern Wood Energy, the webinar was repeated for those that missed it the first time around.

The team was also invited to present a workshop covering climate change mitigation modelling. Juan Monge and Ferran de Miguel Mercader talked about the approach the team had taken to model the many steps and variables along biofuels value chain to work out the lowest cost biofuel solutions for New Zealand. The workshop was attended by local climate change researchers and government representatives. This as an opportunity to understand how biofuels can integrate with New Zealand energy supply and demand, and reduce our GHG emissions.

The team have also been asked to write articles for pulp and paper industry magazine Appita and Industrial Biotechnology, a US-based publication with an emphasis on biobased industrial and environmental products and processes. They have also had stories in the NZFFA magazine Tree Grower, and on Pureadvantage.com.

And if that is not enough, three academic papers are in preparation, covering the qualitative work done with stakeholders, the details of the modelling and a paper summarizing the work. An article is also planned for the IEA Bioenergy Task 34 (pyrolysis and hydrothermal liquefaction research) newsletter.

Both Ian and Ferran agree preparing an easily readable summary report and holding a launch has paid off.

“The attention the Roadmap has received has far exceeded our expectations, say Ian. “The aim of the Roadmap was to stimulate debate about the future of biofuels in New Zealand.

“As a country we need to talk. A biofuelled-future is not going to happen on its own. Strong leadership at national levels is needed.