Energy from wood is good for NZ and the climate

Nothing says warm and cosy more than a fire on a stormy winter’s night. But even the most efficient log burner releases some CO2, a greenhouse gas. How does using wood and other biomass for energy square with reducing our greenhouse gas emissions?

Carbon dioxide is fundamental to life on Earth. Plants use carbon dioxide to capture solar energy during photosynthesis. And when plants die, CO2 is released back into the atmosphere for future plants to use.

This cycling of carbon is known as the biogenic carbon cycle. Using biomass for energy releases carbon that is part of the biogenic cycle and that is reabsorbed by growing plants – the level of carbon in circulation remains stable.

Forestry waste and logs not suitable for timber have been identified by the Scion bioenergy team as the largest available and most likely short-term feedstocks for a biofuelled future New Zealand.

Planted forests in New Zealand are a renewable resource, with replanting following harvesting. Any CO2 released from harvested material during the production of bioenergy, for example, is reabsorbed by the next generation of trees. Using purpose-grown trees for energy comes very close to being GHG emission neutral. 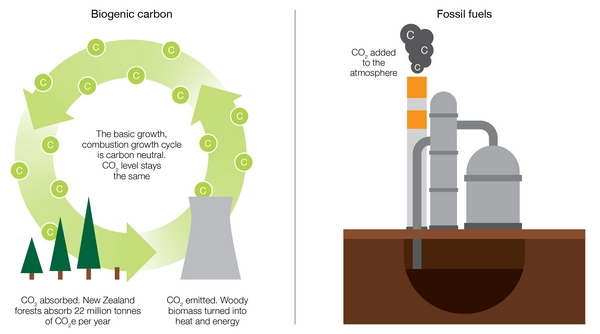