In the May 2019 edition of Tree Grower, Scion’s resident Science communicator Dr Michelle Harnett published a piece responding to a number of comments left by members of the general public regarding an article about forestry published by Stuff. 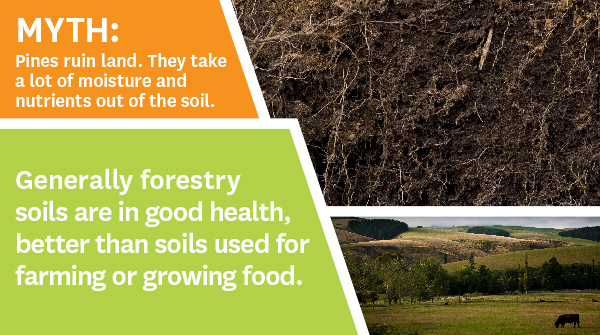 Soils in planted forests are in better shape than soils supporting other primary production. Over 50% of land in planted forests assessed between 2009 and 2013 met the soil health measures for fertility, organic reserves, pH and physical status. In contrast, only 13% of dairy sites and 18% of drystock sites met all criteria. In both cases, soil compaction was a major problem.

Post-harvest and pre-canopy closure, planted forests can look rough and raw and New Zealand planted forests are usually established on less fertile, steeper land that is unsuitable for intense agriculture and horticulture. The soils that support planted forests are generally young and naturally acidic with low levels of nitrogen, phosphorus, and sulphur. 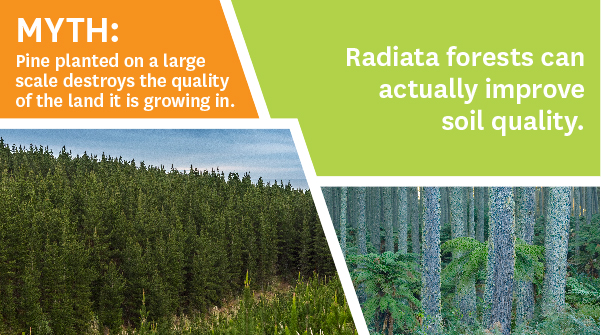 Radiata pine forests can actually improve soil quality. Examples include radiata pine with added superphosphate improving the soil chemical properties of an eroded clay soil in north Auckland; stimulated tree root activity lowered the water table and improved the physical condition of the soil at the same site; radiata pine on coastal sand dunes north of Auckland accelerated the development of a topsoil resulting in a soil classification change from Raw to Recent. 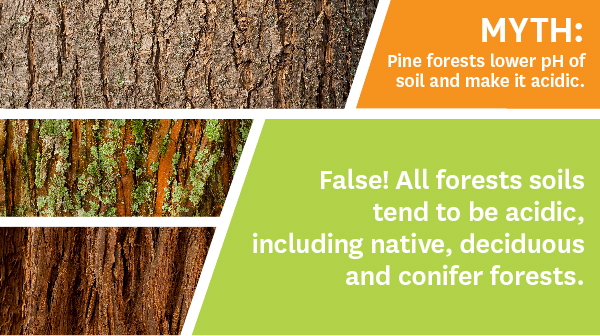 All forestry sites tested between 2009 and 2013 were in the healthy range for soil acidity. The widespread belief that pines lower soil pH is false. In fact, all forest soils tend to be acidic; indigenous New Zealand forests, deciduous forests and conifer forests.

A factor reinforcing the acid soil view in New Zealand could be that grass prefers a neutral to alkali pH. Pasture is usually top-dressed with lime and fertiliser to increase the soil pH. Pasture allowed to regenerate into native forest, or that is converted into planted forest, naturally reverts to a more acidic state.

Examples of soil pH values for different soils and land uses include indigenous forest (pH 5.60), pasture (5.92), maize crop (6.30) (all from the Waikato region). Pumice soil in the Kaingaroa Forest falls within an approximate range of 5.1 to 5.6. 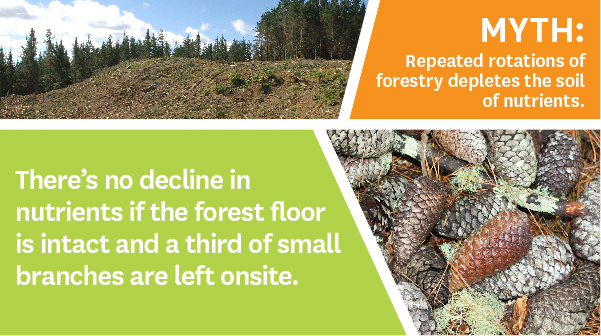 Maintaining fertility from one rotation to the next is a concern as many of New Zealand’s planted forest soils are now supporting their third rotation.

Initial soil nutrient levels, vulnerability to soil disturbance, and the number of harvesting events that have occurred over time influence the impact of harvesting activities. Sites at greatest risk of nutrient deficiencies are those that have soils already low in nutrients (low nutrient soils make up about a third of New Zealand’s total planted forest area).

Scion research has found repeated rotations have not caused a decline in nutrients, as long as the forest floor is left intact, and slash is left on site to supply nutrients to the next rotation. 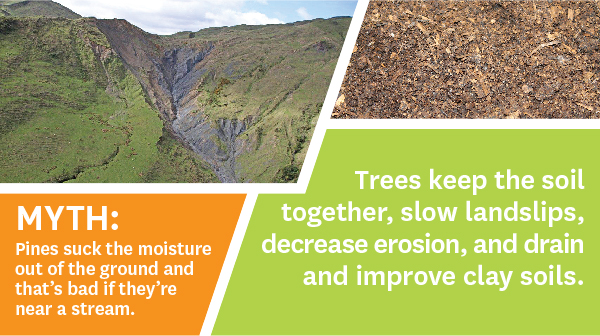 Forests may be better at recharging bed rock than pasture. In landscapes with adequate storage in bedrock fractures, forest regrowth can increase recharge to aquifers, and dry season water flow, compared with cropping.

Trees and their deep roots soaking up water provide other benefits including binding the soil and slowing slip movement, decreasing water runoff and erosion, and draining and improving heavy, clay soils. Trees may also reduce shallow slips and local ‘flash’ floods but are not likely to reduce major large-scale flooding or deep landslides. 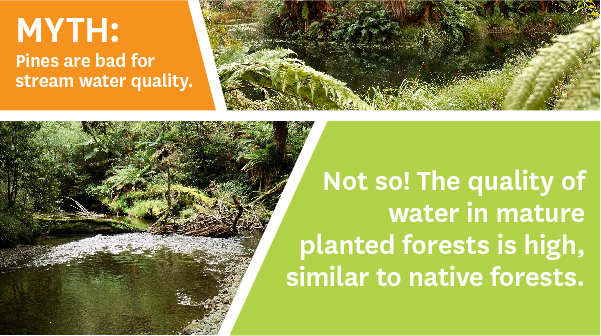 The quality of water in mature planted forests is high and similar to that of streams winding through indigenous forests. Both forest types reduce sediment and nutrient loss, especially compared to scrubland or grassland. Afforestation of pasture land has been seen to significantly improve a wide range of water quality attributes such as stream temperature, nutrient and sediment concentrations and microbial contamination within 4-6 years of planting.

The shade provided to forest streams by mid-rotation to mature planted forests keeps the water cool, providing habitats for native species like the banded kokopu and other galaxiids, longfin eels and freshwater crayfish. The aquatic invertebrate communities are also healthy – a further indication of high water quality.

Water quality can suffer at harvesting, especially with clear-cut harvesting up to the stream edge. Retaining intact riparian buffers, and to a lesser extent, moderate quantities of logging slash across small stream channels, helps reduce harvest impacts. The speed with which streams recovers after harvest is influenced by terrain and harvesting activities. 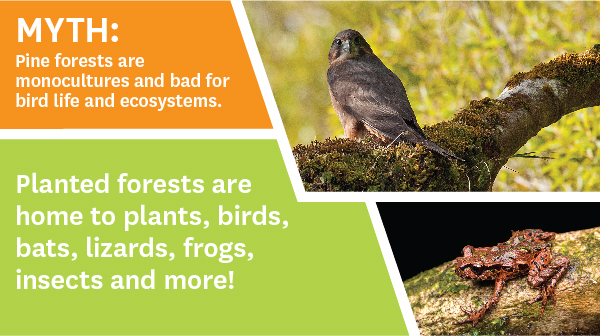 Planted forests are home to plants, birds, bats, lizards, frogs, insects and other invertebrates despite the pervasive monoculture, wasteland myth. Biodiversity levels in planted forests are higher than those found on pastural, agricultural and horticultural land, but lower than the levels in indigenous forests.

At least 120 threatened indigenous species are found in planted forests including kiwi and forestry’s poster bird, the karearea (bush falcon). Kiwi are found in all parts of planted forest, from slash piles to mature stand. The ground nesting falcons like clear felled blocks and the high prey density nearby. Insect eating birds are common, but fruit and nectar eaters less so. Both the country’s rare bat species are also found feeding, commuting and roosting in radiata forests. Bats choose home ranges near native forest remnants and in areas with older trees that provide roosting sites. Carnivorous snails, rare orchids, Archey’s frog – the list goes on. 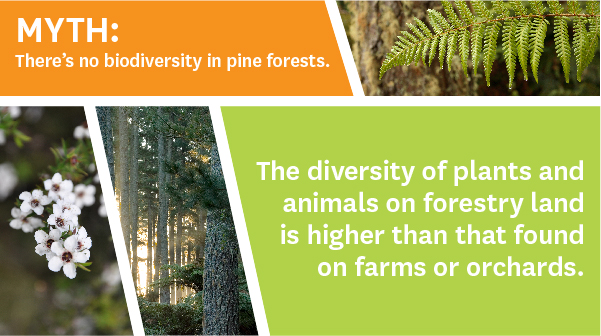 The surprising level of indigenous species living among radiata pine is due in part to planted forests functioning as a haven for some species in highly modified landscapes where they are often the only forest habitat. In fragmented landscapes, planted forests can also become parts of corridors that facilitate species movement between otherwise isolated native forest patches and other habitats.

New Zealand and its forest owners are looking after indigenous flora and fauna. Areas of significance are protected by law. Forest certification systems like the Forest Stewardship Council (FSC) and Programme for the Endorsement of Forest Certification (PEFC) certify forests meet verified standards of forest management, including maintaining, conserving and enhancing biodiversity throughout the entire forest estate. By identifying, mapping and managing areas of significant indigenous biodiversity, forest owners and managers can schedule forest activities around kiwi and karearea breeding seasons, fish spawning, and maintain riparian buffers during logging, for example.  Predator control is another activity that directly improves biodiversity.