Scion’s relationship with Ngati Whare began in 2014 to build a business case for an indigenous nursery at Minginui that included proprietary vegetative propagation techniques for certain native trees, developed by Scion. By 2016 construction of Minginui nursery had begun, and in 2017 Scion and Ngati Whare embarked on a Vision Matauranga Capability Fund partnership to build on Ngati Whare’s unique relationship with the Whirinaki Forest and Scion’s success with nursery development and forest genetics.

Over the past year, Scion Nursery Researcher Craig Ford mentored Iwi Researcher Doreen Roberts, and the nursery produced rooted cuttings of native podocarps like kahikatea Dacrycarpus dacrydioides, miro Prumnopitys ferruginea, rimu Dacrydium cupressinum and totara Podocarpus totara. During the first stage of the research project, Craig and Doreen monitored and adjusted the growing conditions of key podocarp growing trials in the nursery. The second stage focussed on maintenance and measuring of existing nursery trials, the design and implementation of a field trial, data cleaning, interpretation of results and scientific report writing.

Through trial success and failure, we learned about the propagation of podocarps. Further advances were made in vegetative propagation protocols for podocarp cuttings and bilateral knowledge sharing in science and matauranga Maori.

In 2018, $5.8 million was granted under the Provincial Growth Fund to Ngati Whare to expand their nursery capacity from 250,000 to 1,000,000 plants per annum. As well as employing locals, the nursery was expected to draw skilled people back to the village. Immediate ramp-up to production scale was necessary and achieved through a co-management plan, with Scion’s assistance. We were also asked to provide expansion plans for the nursery, and new facilities are now underway. A new full-time nursery manager was appointed in December 2018. This project has also supplied trees to Te Uru Rakau’s One Billion Trees Programme.

The approach used by Minginui management and Scion staff highlights the broad benefits of bringing together the worlds of science and matauranga Maori to remote forestry communities. The sharing of data, knowledge, tools, and the value to science and the community have been greatly enhanced. Fellowship and comradery has grown between the teams as the result of an enduring partnership. 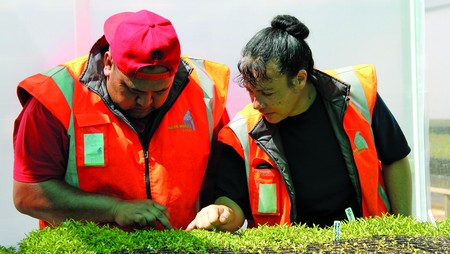