The release of the parasitoid wasp Eadya daenerys to control Eucalyptus tortoise beetle has been approved by New Zealand’s Environmental Protection Authority.

The Australian invader, the eucalyptus tortoise beetle (Paropsis charybdis) has been munching on eucalypts growing in New Zealand for more than a century.

Eucalyptus species are a valuable addition to New Zealand forestry. The fibre, and strong, attractive timber sees them used in corrugated cardboards, high quality paper, furniture, flooring and interior fittings. Some species are naturally durable which makes them an attractive replacement for preservative treated products in outdoor uses.

A severe infestation of Paropsis can leave trees bare and slow growth; successive infestations can kill. Early efforts to use natural enemies of the beetle to keep it in check (biocontrol) have only been partially successful. The only current option to control a bad infestation is aerial pesticide spraying. Not only is this an expensive option for forest growers, the forestry industry is actively working on reducing chemical use.

A renewed focus on controlling the beetle along with Tasmanian collaborators restarted in 2011. The eucalyptus tortoise beetle is not a problem in Tasmanian eucalypt forests, suggesting a range of natural enemies in the environment keep it under control. One of these enemies was Eadya daenerys, a small parasitoid wasp that lays eggs in the larvae of P. Charybdis, which then hatch and develop inside them.

Once research established that E. daenerys was a good candidate as a biocontrol agent, the next step was to make sure that introducing a new species to New Zealand would not harm any indigenous beetles or any exotic beetles that were themselves acting as biocontrol agents against weeds.

Dr Toni Withers, the Scion entomologist leading the research says, “We wanted to be very certain that we weren’t going to introduce another problem.

“We were especially concerned about whether or not indigenous beetles would be vulnerable. Testing this was complicated by the fact the local beetles are very rare and some have not been seen for decades.”

The search for elusive indigenous beetles led Scion staff into the rugged mountains of Kahurangi National Park where they shook hebe plants to see what fell out.

One beetle species, Allocharis sp. was rediscovered after 38 years, captured and brought back to Scion. Tests exposing Allocharis to Eadya found the wasp would occasionally attack the beetle larvae, but no wasp larvae ever survived to adulthood.

Experimental work completed, Scion applied to the EPA for permission to release E. daenerys. Following a hearing in Wellington in January 2019, eucalypt growers received the fantastic news that the EPA had approved the release of the biocontrol agent in February.

The next task for the Scion team is to collect fresh parasitoid wasps from Tasmania (the wasps have a slow growth rate with one generation a year) and bring them back to Scion’s insect containment facility in Rotorua. The first field releases will be in 2020, depending on quarantine regulations. 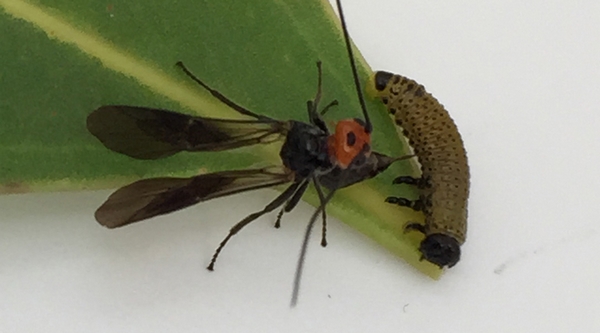