The drone that knows where to go: Making decisions on the fly

A drone capable of flying independently of an operator has cruised beneath the tree tops of a Rotorua pine forest along a flightpath it had mapped itself in what is thought to be a world first.

The use of drones to capture data like photographs and video from the air is common, but it relies on the operator keeping the drone in sight and the drone talking to a GPS system, so it knows where it is.

The drone that recently took to the air in the Scion forest trial area was different. It was an industry standard DJI M210 carrying an Emesent Hovermap sensor unit that can create a map when GPS is unavailable by using simultaneous localisation and mapping (SLAM), and a laser-scanner that doubles as a collision avoidance system to keep the drone safe while flying close to obstacles. The Hovermap sensor fully integrates with the drone flight control system.

“Lidar has been used in forestry for almost 20 years to carry out forest inventory, however the resolution has always meant that we can’t get enough information about the quality of the trees,” says Robin Hartley, who leads Scion’s unmanned aerial vehicle research programme. 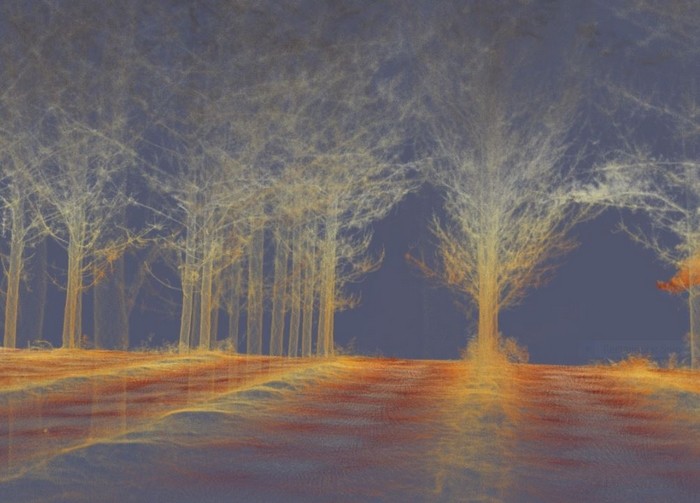 “The problem is that the scanner is not being able to penetrate the canopy enough from above, and up until now, we have not been able to fly a drone safely under the canopy to fill in these gaps.

“Another issue is that we have to be able to keep the drone in our line of sight to operate it, which really limits what we can do standing on the ground in the middle of a tall forest.

“The Hovermap system has changed all that,” says Robin. “It can build a 3D map on the fly and uses that to find a viable route to a target. This includes making decisions to avoid dead ends, and to re-plot new routes to reach the target. The system also enables the craft to sense new obstacles that appear as it is scanning and flying.”

A safe, efficient and effective way to gather under canopy data is the last piece in the puzzle of representing a forest digitally and creating a complete picture of the forest from above and below that identifies and characterises individual trees.

Scientist David Pont, says the system is a game changer for measuring individual trees in forest inventory and research trial settings. “We can now develop the methods to detect tree stems and take detailed measurements including location, diameter, height, stem volume, branching, and stem defects, all of which determine the value of wood in the trees.

“This information will be used to guide precision forest management such as tree thinning operations, targeted applications of fertilisers and more accurate information for tree harvest and marketing.

“Data like this has the potential to revolutionise the measurement of research genetics trials” says David. “Exceptional individual trees for inclusion in tree improvement programmes can be identified, and improved descriptions of tree characteristics will help us make better tree breeding selections, resulting in better trees shaping tomorrows forests”.

Autonomous flying will also speed up the data gathering process and make it safer. A drone can move above uneven ground cover in scrub faster than someone pushing through blackberry hoping they don’t twist an ankle in a hole. Areas that have been previously completely unreachable will also be able to be surveyed. Hovermap-enabled craft will also be able to carry additional sensors, providing more data than ever.

This work has concentrated on data-gathering in a plantation forest but the technology is equally usable in native and urban amenity forests, for example. Forest health, predator damage and control, storm damage etc could all be monitored to keep all New Zealand’s forests growing strongly.

For more information about the work and UAV use in forestry contact David Pont or Robin Hartley.

Emesent is a spin-out from CSIRO’s Data61. It specialises in robotics, AI, drone autonomy, mapping, and data analytics and is leading the way in automating the collection and analysis of data in challenging environments.

The Hovermap sensor was originally developed for use in underground mines where there is no GPS signal, and the environment is confined, dark and and hostile. Forests are equally challenging environments, with no GPS, rough terrain with hidden obstacles such as rocks, holes and fallen trees buried in thorny, scrubby undergrowth.