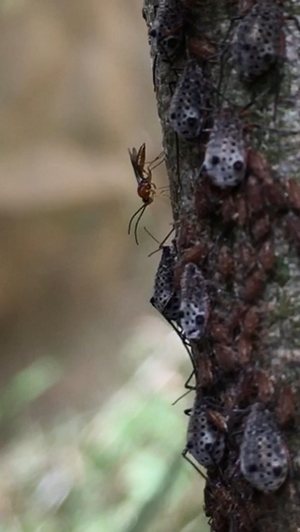 Researchers from Scion have begun releasing a biocontrol to manage the giant willow aphid (GWA). The biocontrol is a parasitoid insect that will control GWA naturally, avoiding the use of pesticides and their potential to harm nectar feeders.

GWA have caused a slew of problems for willows and for beekeepers. Wasp populations reach plague proportions because of the plentiful food source provided by the aphids secreting sticky honeydew after feeding on willows. Bees also feed on the GWA honeydew, but it produces crystalised honey that can’t be extracted.

GWA has a natural enemy called Pauesia nigrovaria (Pauesia), which is a small parasitoid insect that occurs naturally overseas, including in California. Pauesia reproduces by laying an egg inside a GWA, which grows inside the aphid, eventually killing it.

Stephanie says, “We brought Pauesia into our quarantine testing facility at Scion and presented them with other aphid species, including natives. The results indicate that Pauesia is very focused on GWA, and will not attack native aphids.” These tests formed the basis of our application to the Environmental Protection Agency (EPA) to release Pauesia in New Zealand, which was granted in December.

Stephanie is confident the Pauesia will barely be noticed after it is released. “They are very small (only 3-4 mm long) and don’t have any ability to sting or bite. Humans, animals and other insects will not be affected.”

Release of Pauesia will be staged, taking place at regional locations across New Zealand, starting in the North Island in late summer.

What checks and balances have been put in place to ensure Pauesia is safe to release in New Zealand?

Pauesia has been through a rigorous testing process in Scion’s secure quarantine facility. It was tested for host specificity over 18 months using non-target aphid species present in New Zealand, including native species, to ensure it will not pose a risk to any other aphid species.

The EPA approved the release of Pauesia on 3 December 2019, the colony has undergone disease screening, and MPI has granted biosecurity clearance for the release.

How do we know it will work?

Pauesia nigrovaria is presumed to be the primary contributor in keeping GWA under control in North America where GWA numbers are much lower. There is no way to know how well it will work in New Zealand, however other species of Pauesia have been used successfully as biocontrol agents for related aphids in other parts of the world.

Scion researchers will continue to monitor the Pauesia and GWA populations for 2 years after release to determine its impact.

The total impact of GWA damage in New Zealand is estimated to be nearly $300 million per year, considering the value of willows for erosion control and carbon sequestration, impacts on apiculture and pollination services, and the harmful effects of sooty mould on orchard crops such as kiwifruit. The cumulative value of Pauesia nigrovaria as a biocontrol agent for giant willow aphid is calculated at between $1.3 billion and $1.7 billion over 20 years.

When did the GWA arrive in New Zealand?

Giant willow aphids (GWA) were first discovered in New Zealand near Auckland in December 2013, and are now widespread throughout the country.

Will GWA be eradicated?

No, the release of Pauesia is only expected to reduce and control numbers of GWA.

Is there any risk to humans, pets, livestock or other insects?

No, Pauesia have co-evolved with the GWA and will only target them. Pauesia are very small, have no stinger and do not build nests.

How do Pauesia control GWA?

Pauesia cannot survive and reproduce without GWA. They spend most of their life cycle as larvae feeding and growing inside GWA, and the GWA die as the Pauesia reach maturity. The adult Pauesia then chews its way out of the dead aphid’s body, seeks a mate, and the cycle continues.