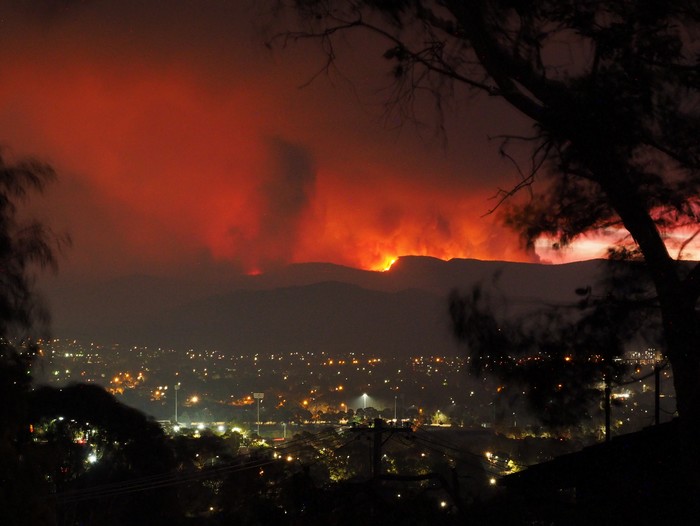 It’s not easy to spot the start of a remote wildfire from space. Satellites orbiting far above the earth collect mind-boggling amounts of data, creating images of what is happening on the land below. Spotting the start of a fire is sometimes akin to looking for a needle in a haystack. Thankfully a solution is in sight.

Mid-morning on 7 September, Scion scientists Dr Ilze Pretorius and Kate Melnik switched over to Australian time (AEST). They met with their online research partners Alex Codoreanu and Jack White from Swinburne University of Technology in Melbourne.

These four make up an unlikely but promising team. Alex’s experience is in astrophysics and Jack is working on the frontline of artificial Intelligence (AI) and machine learning. Ilze specialises in atmospheric science, and Kate was a Canadian wildland firefighter in a past life and now works in Scion’s rural fire research team.

They have been brought together by the Bushfire Data Quest, working in an accelerated research mode called a ‘sprint’. This is where carefully chosen experts in machine learning pair up with subject matter experts. For one intense week (plus weeks of preparation and write-up time) they focus on a single problem and try to prove it is solvable using AI and machine learning. The Bushfire Data Quest had four interdisciplinary teams researching bushfire related problems.

How can we detect wildfires sooner?

The one question our team of researchers needs to answer is ‘How can we detect remote wildfires sooner from orbit?’

Currently, fires are mostly ‘called in’ from observers on the ground. Satellite data is often only used after the fire has grown and spread, but the potential is there to build an excellent early-warning system. The current fire sensing systems use infrared imagery from a combination of polar-orbiting and geostationary satellites. Polar-orbiting satellites can only supply information twice a day – potentially missing lots of ignitions. Geostationary systems are updated more frequently but are known to miss small fires as they lie further from the Earth and their images are relatively coarse. Infrared imagery is used to identify hot spots on the terrain. When a hot spot exceeds a defined temperature threshold, it is assumed to be a wildfire. The next step is to triangulate the location of the fire and send a fire crew to investigate. This system is not fool proof. Hot spots, such as dark surfaces heated by the Sun, can naturally occur across the landscape and create false positives.

Spotting a fire 10 minutes earlier can make a big difference to how easily it can be fought and extinguished. Team members were confident they could significantly improve the present system, applying the power of machine learning and image enhancing techniques borrowed from astrophysics to geostationary satellite imagery.

What the team worked on

Geostationary satellites rotate in-sync with the Earth and always have a view of the same landscape below them. This means there is more current and frequently refreshed data to work with. However, the high orbit of the geostationary satellite results in a relatively low resolution image, with one pixel equal to four square kilometres.

The team used machine learning and advanced data processing to manipulate the raw lower-resolution satellite imagery. They were able to create higher resolution imagery and increase the contrast between fire and non-fire areas. They tested their approach from a 2020 bushfire near Canberra in the Orroral Valley. Two algorithms were used to build a method for early fire detection.

The first technique was borrowed from astronomy. It stacked six images together from before the fire to create a reference image of the landscape free from clouds. This image helps to understand the existing distribution of heat in the landscape and helps to exclude false positive detections. The early fire detection happens by calculating the difference between the “stacked” reference image without a fire to an image shortly after fire ignition, showing what has changed. Like a game of spot the difference, the algorithm detects the fire based on a statistical deviation between the two images.

The second algorithm applied a cutting-edge machine learning technique called 'super-resolution.’ This technique reconstructs a high resolution image from low resolution imagery by ‘baking in’ information on existing structures on the landscape. The imagery created helps to determine the spatial location of the fire when it is still smaller than the natural pixel size. The caveat of this model is that it must be trained on the terrain and landscape it is being used to enhance. 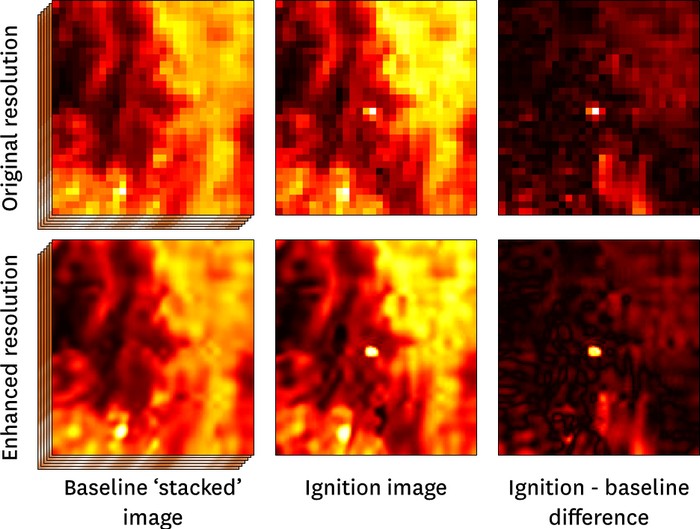 A demonstration of how the two image enhancing techniques come together to produce an accurate image of the fire.

The image stacking and super resolution techniques have significantly increased the heat signal of the fire against the background of the landscape (made the fire more distinct from the background landscape), compared to existing methods. The team believes that their method will be able to detect fires sooner than current methods. They can’t wait to test their method on further case studies, including New Zealand based fires in the future.

With further investigation, these results could lead to a fire detection system with fewer false positives and earlier detection of fires. This could help emergency services respond faster and more effectively to fires, better protecting people, property and biodiversity.

There is significant opportunity to apply this work in Scion’s own research developing real-time automated tools for fire detection, fire growth and smoke prediction tailored to New Zealand.

Reflecting on their experiences

Reflecting on the project, Kate says the turbo charged format of the event helped them to pull off some incredible work. “We work well under pressure,” she jokes. “It’s astonishing what we’ve managed to pull off in a week, and that’s down to the amazing preparation, the highly focussed and fast format and the mix of skills we had in the team.”

Ilze agreed, “Our field of science is getting more and more complicated. It’s no longer just the science of fire, it includes the science of people, weather, and technology. We’re at the stage now where we can make significant progress by including people from different research backgrounds. It’s incredible what you can achieve when you put a multidisciplinary team together.”

Scion expertise in the leadership

She says, “The work done by the teams is foundational research that will support improved gridded moisture values for fire spread models, improved understanding of fire-area, earlier detection of wildfire fires, and accelerated rate of spread predictive capabilities. I look forward to seeing the work achieved by the teams evolve to the point that it can be placed into the decision support products.”

More about the Data Quest

The Bushfire Data Quest builds on methods for conducting accelerated research first developed as part of Frontier Development Lab (FDL) in the USA  and Europe. FDL is a public-private partnership involving some of the best minds from NASA, the European Space Agency, the SETI Institute, Oxford University and commercial partners including Google, NVIDIA, IBM, Intel, Lockheed Martin and others.

The Data Quest runs for one week and focuses on the early stages of development - proving a problem can likely be solved using AI methods and space data. Future work will build on the Data Quest results, with a clear vision for developing practical tools for deployment in the field.

The bushfire topic of the 2020 Data Quest was chosen in response to the devastating Australian bushfires of 2019-20. Trillium Technologies, who organised the Data Quest, intends to expand the FDL format into Australia and New Zealand in 2021, continuing to tackle bushfires, but also expanding into disaster resilience, astrophysics and more.

The four teams taking part shared their results online at the Data Quest Showcase on 16 September. Full recordings of the showcase, including team presentations, can be viewed online.

The 2020 Bushfires Data Quest is powered by Trillium Technologies and organised in partnership with Frontier Development Lab, The Minderoo Foundation, the NSW Government, The NSW Office of the Chief Scientist & Engineer, ANU Institute for Space and a host of academic, government and commercial partners. 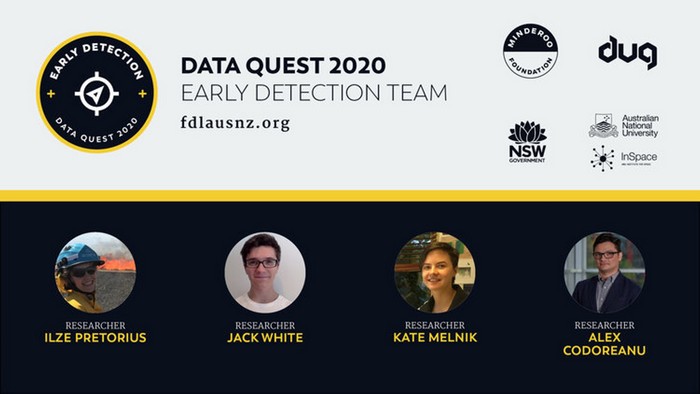 More info is available on the Bushfires Data Quest website.