Using less fungicide in radiata pine nurseries can lead to more seedlings surviving and thriving after being planted out according to a new paper from Scion researchers.

Plantation forestry in New Zealand needs a regular supply of well-developed and disease-free radiata pine seedlings. Fertilisers and fungicides tend to be used in tree nurseries to ensure this. However, exposure to these chemicals is known to affect the beneficial fungi that form mutually beneficial relationships with the pine seedlings. These ectomycorrhizal fungi help seedlings get water and nutrients while protecting against root pathogens.

Earlier work looking at the effect of fungicides on the fungi communities associated with pine seedling roots found that numbers of the most beneficial fungus were strongly reduced. Increasing exposure to fungicide was also associated with smaller seedlings (decreased root collar diameter).

The researchers were curious as to the possible long terms effects of manipulating seedling fungal communities. They randomly selected nearly 2,600 seedlings that had been exposed to different fertiliser and fungicide treatments for planting in the Kaingaroa Forest. The survival and growth of the seedlings was monitored over the next six years.

Trees that received no or low fungicide treatments had a significantly higher survival rate after six years, and tended to have a greater diameter at breast height although the difference was not significant. Plot basal area, however, was significantly greater for trees that had been exposed to less fungicide.

Differences in fungal communities tended to even out with time. After two years, any legacy nursery effects had disappeared, with the influences of planting site dominating the fungal associations with the growing trees. While this shows any direct influence of the nursery fungal community structure on tree performance was short lived, seedlings that received less fungicide were slightly larger at planting. This head start may just be enough to increase productivity relative to the other fungicide treatments.

Trees that received standard or increased amounts of fertiliser were also larger at planting, however, after six years, no difference between fertiliser treatments could be seen.

The authors caution that as the stock for this field trial were obtained from a single cohort of seedlings from one nursery and the field results were derived from a single forest site, the wider relevance of the outcomes cannot be currently be confirmed.

However, a range of other nursery outplanting trials are now underway across New Zealand, and interim results from these trials are aligning with those discussed here.

Overall, this research provides a new opportunity to explore the potential risks and gains associated with altering nursery chemicals to meet the needs of both nursery and forest managers while also reducing negative environmental effects from chemical use, such as nutrient leaching, strengthening the social licence of nurseries to operate. 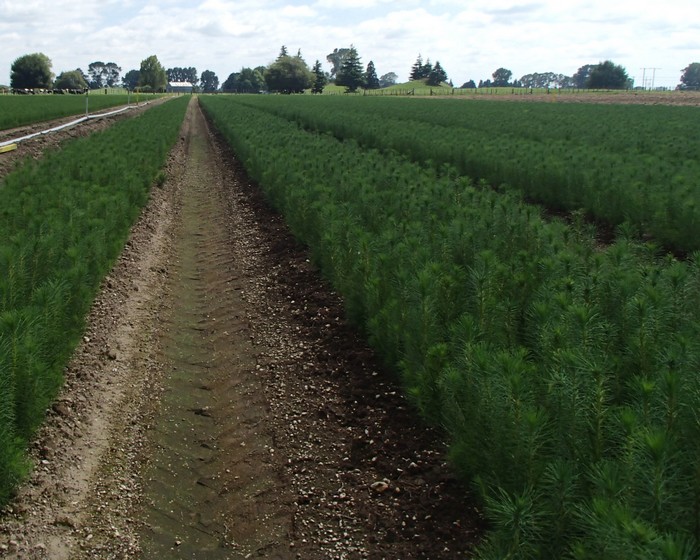