Climate change modelling predicts that New Zealand will become hotter and drier, creating conditions that will increase both the frequency and severity of wildfire events.

A new report titled Adapting and mitigating wildfire risk due to climate change: extending knowledge and best practice, updates our knowledge on wildfire risk for New Zealand and the effect of climate change. It has been released by Scion’s Rural Fire Research Team and Dr Nathanael Melia, Victoria University of Wellington’s adjunct senior research fellow at the National Climate Change Research Institute and director of Climate Prescience.

Highly detailed climate model simulations in the research describe future wildfire danger projections in every 5x5 kilometre grid cell across the country. This has found that for many regions, climate change is predicted to increase the wildfire risk substantially, with an increase in the frequency, severity and season length of fire weather conditions through until at least mid-century, regardless of climate mitigation efforts.

Scion general manager for Forests and Landscapes, Dr Tara Strand, says the risk of wildfire is higher in some parts of the country than others, depending on climate patterns and how densely populated an area is.

“Concerningly, the study showed conditions that led to the devastating ‘Black Summer’ fires in Australia during 2019-2020, already occasionally occur in parts of Central Otago, but could become much more frequent with climate change, occurring every three to 20 years in some Mackenzie Country, Central Otago and Marlborough areas,” Dr Strand says.

Residents living in Mt Iron, a community between Wānaka and Albert Town, 70km from Lake Ōhau, took part in focus groups and interviews in a detailed case study led by senior social scientist Lisa Langer from the Scion Rural Fire Research Team. This focused on the rural-urban interface where residential houses are right next to, or mixed with, rural vegetation. The study identified both individual and collective actions that need to be taken in their community to mitigate wildfire risk. These included having a designated evacuation route, clearing vegetation and having an early warning system for residents. Some issues were outside of the control of residents, such as restrictions to remove protected native kānuka vegetation around their properties and access for fire trucks on the same one-way evacuation routes for residents.

“The research team worked with local representatives from Fire and Emergency NZ (FENZ), Queenstown Lakes District Council, Emergency Management Otago, Department of Conservation, and the Wānaka Community Board. Following on from this research these agencies have collectively established a Mt Iron Wildfire Risk Reduction Project with community involvement to help support the evaluation and implementation of risk reduction actions.”

“In order to provide advice for homeowners to prepare themselves and their homes to reduce their risk from wildfire, best-practice mitigation recommendations from New Zealand, Australia, Canada and the United States were reviewed,” Dr Strand explains.

“Queenstown Lakes has many residents living in rural-urban interface locations where the appeal of living close to native vegetation must be balanced with the inherent risk of wildfire,” Nicoll says.

“This research has played an instrumental role in helping to establish risk awareness and collaborative planning for the Mt Iron community. The team has helped shed new light on the status of current preparedness and it has identified key areas of focus where mitigation and readiness initiatives will be of most benefit.”

The research acknowledges there are limits to what individuals can do in terms of preparedness and the findings from this study have informed the next phase of research which will focus on planning and legislation in the rural-urban interface. 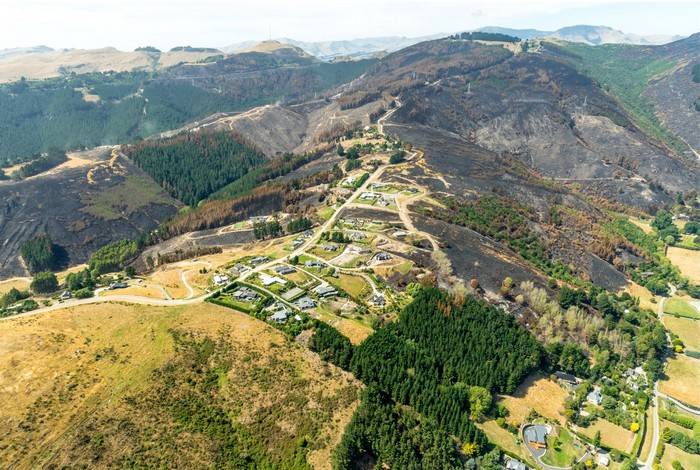 An example of the rural-urban interface. In the 2017 Port Hills wildfire, 14 houses were destroyed or significantly damaged and over 450 households were evacuated.

Scion’s changing wildfire risk with climate change research has updated our knowledge on wildfire risk for New Zealand. For many regions, the wildfire risk is likely to become worse through the rest of the century compared to the last two decades. This will have significant implications for climate adaptation and emergency readiness.

Wildfire mitigations for homeowners and communities: Around 170 recommendations have been developed which describe mitigation actions homeowners can take to prepare themselves and their homes to reduce their risk from wildfire. The list of recommended mitigations can be accessed from www.ruralfireresearch.co.nz/?a=80924

Further details can be obtained in the following publications: