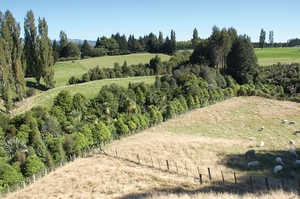 In 2014, Scion’s Economics, Ecosystems and Climate Team was contracted by the Bay of Plenty Regional Council to evaluate the ecosystem services relevant to different land uses in the Ōhiwa catchment.

Identifying, and attributing a value to, the key ecosystem services provided by each land use will provide the council with a framework for land management that will see the potential of each service realised.

“Food and fibre have traditionally been considered more important than the other groups because of their monetary value. Services such as recreational walking and avoided sedimentation in waterways, are already recognised in policy but have non-monetary values, which make them less clearly understood.

“The development of non-monetary valuation techniques now makes it possible to estimate the value of these services and include them in land management discussions, alongside those services with monetary values. This allows better policy to be made.”

However, when services with non-monetary values were included, exotic forestry was found to be the only productive land use with a positive ecosystem service value. Among natural land uses, wetlands provided the highest value per hectare, followed by indigenous forest and scrub.

“The monetary values we are reporting here are indicative, not absolute dollar values, but provide a good starting point from which council can begin comprehensive land management planning for the Ōhiwa catchment that will deliver beneficial ecosystem services, particularly around water management. Good planning will sustain and enhance the provision of those services for economic prosperity and improved human well-being.”

The final report was completed in October 2014 and will contribute to the Bay of Plenty Regional Council’s planning and policy discussions in land use management. These data have also benefited other Scion-wide projects such as the Growing Confidence in Forestry’s Future and other related projects.