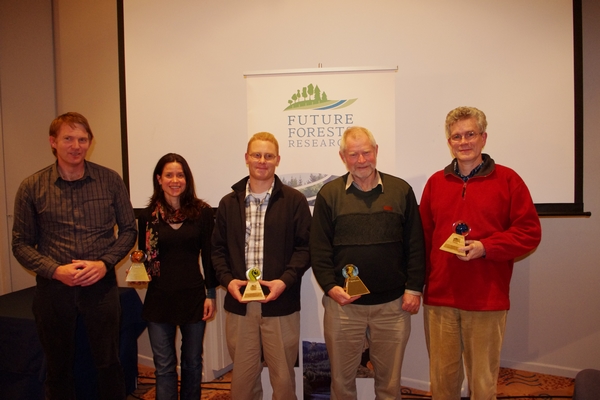 Prizes awarded recently by Future Forests Research (FFR) highlight the ways in which science adds value to the forestry sector. Among the recipients were three Scion scientists who have made significant contributions in their field of expertise, and who represent larger bodies of work that have helped to shape the forest growing industry.

Scion statistician Mark Kimberley received the ‘Science of International Quality Award’. During his 34 year career in forest statistics, Mark has undertaken ground-breaking research to develop new techniques for modelling the growth of forests. In particular, he enabled the development of a new growth index, known as the 300 Index that predicts the productivity of radiata pine across New Zealand. He was also the architect of a similar model, the 500 Index, for Douglas-fir.

FFR Chief Executive Russell Dale says the 300 Index has replaced a series of regional growth models and is a major step forward for the forest industry.

“Mark has published this work in international journals and it is considered to be world leading research,” he explains.

Behind this success is a long history of data collection and growth model development involving many people over several decades. Mark’s role has been to take the large volumes of data and shape it into meaningful tools that forest managers can use to make planning decisions. And use them they do. Software built around the 300 Index has been adopted by most major forestry companies in New Zealand, and several in Australia.

A second award recognising science that enhances sector value went to Michael Watt and Carol Rolando. Their research has enabled the forest industry to continue weed control in newly planted forests, using chemicals that have not been viewed favourably by international accreditation agencies.

These achievements draw on research that began in the early 1980s when the industry recognised the need to use herbicides in a cost-effective and environmentally-responsible way.

“The work done to understand the fate of the chemicals after application and to find alternative chemical formulations that are more benign in the environment has been of significant value to the forest industry,” Russell explains. “Without these chemicals, commercial plantation forestry would not be viable on many sites in New Zealand.”

Scion’s General Manager for Forest Science, Dr Brian Richardson, says the achievements highlighted by these awards illustrate how forest management practices are influenced by science that has gone on behind the scenes for decades.

“The FFR awards are a great way to acknowledge the importance of this contribution and it is very positive for the forestry sector to be recognising the value of science in this way,” he says.