Capturing the beauty of paua 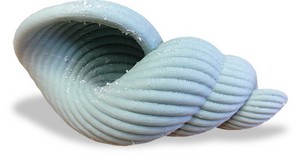 The iridescent beauty of paua shell may soon be captured in everyday household items. Materials scientists Drs Marion Sanglard and Marie Joo Le Guen are working with abalone farming company OceaNZ Blue to investigate possible uses for paua (abalone) shells that are being discarded during processing. The project is partially funded through the Bioresource Processing Alliance.

Paua shells are currently exported to Asian countries for processing into such things as decorative veneers, powders for cosmetics and homeopathy treatments. In 2014, over 50,000 tonnes of shellfish were exported to a value of $385 million, representing a third of New Zealand’s fisheries export revenue.

“Shells from gastropods and bi-valves such as abalone, mussel and oyster, contain plates of calcium carbonate that are cemented together by biopolymers and provide the shells with exceptional toughness,” says Marion.“ Calcium carbonate is commonly used as filler in the manufacturing of biocomposites, so we’re investigating paua as an exemplar resource for powders and polymer compounds for 3D printing. In addition to its natural toughness, paua has a characteristic colour which will bring an intense visual impact to a product.”

The paua shells are ground into powders and made into composites via extrusion, injection moulding or 3D printing.

“We’ve proven the concept that paua shells can be used to make biocomposites for 3D printing, and are now evaluating their performance against generic calcium carbonate. If viable, this concept may be extended to include other sea shells, possibly generating an additional revenue stream for our fishing industry, rather than that value being realised off-shore.”

A video featuring this novel technology was created for a video challenge competition for the inaugural ECO_BIO 2016 conference, held in Rotterdam in March. The video won the Popular Choice Award.