Yesterday afternoon, 18 May 2017, Scion hosted a ceremonial planting of a Gallipoli pine and a Wollemi pine.

The day happened to be Fascination of Plants Day, an internationally recognised occasion to celebrate the importance of plants to science through forestry, agriculture and conservation. Scion used the occasion to celebrate its scientific contribution to the long-term survival of two plants by hosting a ceremonial planting of a Gallipoli pine and a Wollemi pine.

The two trees were planted at Scion’s Rotorua campus also as part of a programme of events marking Scion’s 70th year.

CEO Julian Elder said in Scion’s 70 years the institute has undertaken research that has brought huge benefits to forestry in New Zealand and around the world.

“Trees are very important to New Zealand, for our economy, our lifestyles and our environment. Going forward their significance will continue to grow.”

The Gallipoli pine and Wollemi pine are examples of how Scion expertise has helped to protect the future of two internationally significant trees.

Before 1994, it was thought that the Wollemi pine only existed as fossils. However, this ‘dinosaur tree’ was given a new lease on life after the serendipitous discovery of live specimens at the bottom of a narrow gorge in Wollemi National Park, 150 km from Sydney. In collaboration with Australian researchers a Scion team developed tissue culture protocols to grow the population from the Wollemi National Park. All the plants in New Zealand originate from the tissue culture collection at Scion.

The Wollemi pine is one of my memorable and exciting projects,” said Cathy Hargreaves who led the tissue culture team. “To start with, it was a very secret-squirrel project. Ministerial approval was required for both collection of samples and for export to New Zealand. Even now, a special licence has to be obtained to sell Wollemi.”

Now an emeritus scientist at Scion, Cathy was on hand to plant a Wollemi pine with General Manager Forest Science Alison Stewart.

The Gallipoli pine was planted by Rotorua Returned Services Association President, William McDonald. The tree is a direct descendant of the Gallipoli Peninsula’s Lone Pine. On 6 August 1915, Australian troops attacked the Turkish trenches and the tree was a casualty of the four-day battle. After the battle, Australian Sergeant Keith McDonnell took one of the pine cones back to Australia. In the years that followed, a number of trees were propagated in Australia and New Zealand. In 2012, Scion field scientist Toby Stovold collected seeds from the Turkish red pine Pinus Brutia, at the Paeroa Golf Course –an authenticated descendent of the Lone Pine. His efforts produced over 50 seedlings that were donated to Returned Services Association’s across New Zealand.

Dr Julian Elder, Scion CEO, said, “Trees are vital for the future of the world and New Zealand because they offer so much; from helping combat climate change to creating a sustainable bioeconomy. As a nation, we must understand and embrace the advantage we have with the renewable resources our trees provide.

“Scion’s past work has bought about mighty innovations and laid fantastic foundations for our future work creating prosperity from trees.We truly do have the potential to grow a strong bioeconomy based on forestry.

“The commemorative planting of these ‘historic’ trees, on International Fascination of Plants Day, in our 70th year, honours the science that made them possible and welcomes the innovations of the future.” 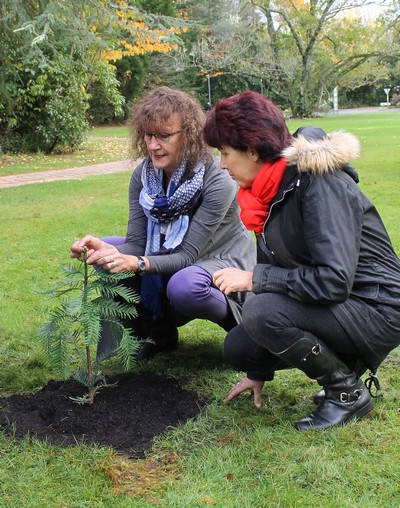 Cathy Hargreaves (left) and Alison Stewart examine interesting features of the Wollemi pine directly after planting it in the Scion campus.