An injection of $5.8 million into the Ngāti Whare native plant nursery is set to spark a new beginning for indigenous forestry in New Zealand. The Minginui Nursery is the only place in the country using newly developed Scion technology that enables mass production of native podocarps.

Hon Minister for Forestry and Regional Economic Development, Shane Jones, made the announcement at the Minginui Nursery on 15 March.

The Minginui Nursery has nine full time staff and has already supplied thousands of trees to customers, including neighbouring iwi. This investment will allow the nursery to scale up its infrastructure and employ more staff to increase production from the 100,000 trees grown in 2017 to 1 million trees produced annually by 2021.

When Ngāti Whare decided to build a state-of-the-art nursery in Minginui Te Whaiti, they had plans to grow more than just plants. They needed a supply of 10,000 trees a year to restore their whenua, returning 600 hectares of harvested radiata pine forest to indigenous forest. Rather than buying plants, Ngāti Whare built a nursery that created jobs for the Minginui Te Whaiti community.

At that time, Scion was in need of a partner to scale-up our indigenous rapid propagation technology. Fortuitous introductions led to Ngāti Whare rolling out the new technology at Minginui.

Dr Russell Burton, Scion’s General Manager for Research and Investments says, “What has evolved is a first of its kind, enabled by a successful technology partnership between a Crown Research Institute and Ngāti Whare.

“Together we have developed a cross-cultural understanding of tikanga Māori and the scientific language and research methods used in rapid indigenous propagation technologies and research.”

Science behind the trees

The new rapid propagation technology being used by Minginui Nursery is just the beginning for Scion and Ngāti Whare as we work together to build a new sustainable indigenous forestry industry in New Zealand.

Developed by Scion, the methodology is the product of over 20 years of fine tuning by experts in nursery propagation techniques.

This new technology provides significant benefits when compared to seed propagation. It removes the variability of seed supply and genetics, giving growers control over the stock selection and allowing the mass production of high-quality trees.

Planting for a purpose

The trees produced from the Minginui Nursery are destined for land resilience projects including erosion control and riparian margin planting with an option of selective milling for landowners. They may also be part of a future podocarp forestry industry for New Zealand.

The Minginui Nursery could be the first of many high-tech indigenous nurseries mass propagating podocarps across Aotearoa, and the origin of a new sustainable indigenous forestry regime. 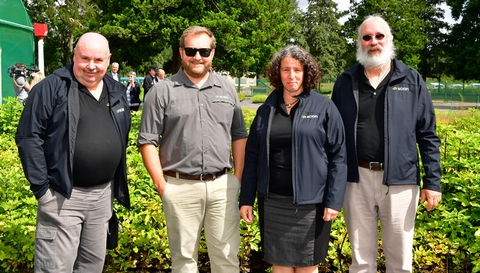