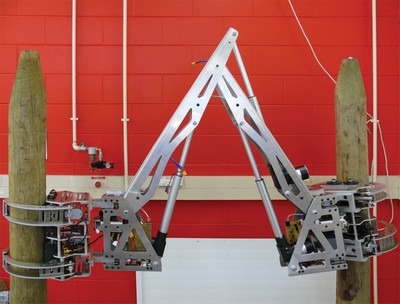 The tree-to-tree machine can move using trees as supports.

A remote controlled tree ‘swinging’ robot modelled on stick insects and spider monkeys may revolutionise the way steepland forests are managed and harvested.

The two-armed forest locomotion robot, nicknamed ‘Stick Insect’ because of its deliberate movements, can be manoeuvred from tree to tree without touching the ground, using a joystick control. The device has been developed by Scion in partnership with the University of Canterbury, Future Forests Research and the Ministry for Primary Industries under a Primary Growth Partnership Programme to improve worker safety in steep, rugged terrain.

“I’ve been working on the concept of a tree-to-tree machine for over 10 years, and this funding has enabled the project to progress,” says developer Dr Richard Parker, Senior Scientist at Scion. “The challenge is to develop a lightweight remote controlled machine that can move over steep, difficult and sensitive terrain without causing damage to the ground, and yet tackle productive tasks such as felling trees, cost-effectively.

“The Scion tree-to-tree machine, or ‘Stick Insect’, is a mobility platform. We have been trialling the device in the mechatronics and robotics laboratory at the University of Canterbury to better understand its operating capabilities and are now working to incorporate gadgets to perform tasks, such as sensors for measuring tree diameter, and custom-built saws for felling.”

Richard based his design for the Stick Insect on the ways animals and insects propel themselves through the forests.

“Animals have evolved over millennia to move effortlessly between trees. The most impressive are spider monkeys and gibbons which can swing from tree to tree at high speed. I simply borrowed that concept and worked with a team of scientists and engineers to develop the prototype of a mobility platform based on that.”

Richard built the initial working models himself from balsa wood with syringes for hydraulic rams. Scion recognised the potential of the idea and in 2009 developed a strategic theme around the tree-to-tree concept. One of the outcomes was the first radio controlled tree-to-tree device built with colleague Matt Watson (ScanTec Ltd). The FFR and MPI funding provided the opportunity to do some serious engineering with the University of Canterbury.

With guidance from Professor XiaoQi Chen and Dr Stefanie Gutschmidt, Scion sponsored four students from the University of Canterbury Department of Mechanical Engineering to design and construct a quarter-scale working prototype as their final year research and development project. As Richard says, students Tom Gilbert, George Wareing, Scott Paulin and Sean Bayley showed great engineering flair by creating, designing, assembling and testing the components and control systems into a final working device. The prototype Stick Insect has a 2.2 metre reach and weighs about 50 kilograms.

“The device is lightweight but robust, and can move using the trees as supports. Its full weight is supported by grippers on the end of each arm so it does not contact the ground at all,” says Richard.

As part of the FFR programme, Richard is currently working with the university’s PhD students Chris Meaclem and Bart Milne, and Paul Milliken (Cutover Systems Ltd) who are developing instrumentation and software to better control the device. Richard is hoping to secure further funding to incorporate other functions.

“We envisage that we can eventually develop a whole family of tree-to-tree robots which can perform productive tasks in the forest. Large robots to fell trees, smaller robots to prune and measure trees - perhaps even refuelling robots. They will still need humans to oversee their operation and maintenance, but they will be at a safe distance away from hazardous operations.”

The Scion tree-to-tree machine has been developed in collaboration with the University of Canterbury, with funding support from Future Forests Research and the Ministry for Primary Industries through the Primary Growth Partnership for Research.