Forester of the year 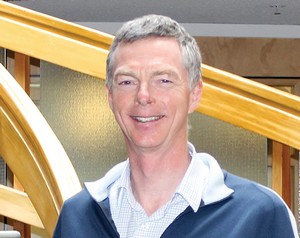 In recognition of his contribution to the forestry sector, Dr Brian Richardson, Scion’s General Manager Forest Science, was recently presented with the New Zealand Institute of Forestry (NZIF) Forester of the Year Award.

“The announcement came as a complete shock,” says Brian. “I didn’t know I’d been nominated. I was sitting at the awards dinner hearing the presenter describe the award recipient, and thinking, gee he sounds familiar.”

The award recognises leadership, excellence and personal integrity, particularly where this demonstrates the character and strength of the forestry profession.

Brian has been with Scion for over 30 years, since Scion was part of the Forest Service and known as the Forest Research Institute and before it was established as a New Zealand Crown research institute. In that time he has seen some significant changes.

“Probably the biggest change that’s happened in my time, was when the New Zealand Forest Service was abolished in the late ‘80s. Indigenous forests were handed to the newly formed DOC and a lot of the Crown planted forests were sold to the private sector.

“There’s more transformation to come with forestry well positioned to take advantage of forecast global fibre shortages, to underpin regional development and support climate change mitigation strategies, and a perfect complement to reduce the environmental footprint from other productive sectors."

Brian is the third scientist from Scion to receive the Forester of the Year award.  Former staffers John Balneaves and David Bergin have received the accolade. Former staffer Bruce Manley received the award before he was at Scion, and former Scion board member Peter Berg is also a recipient.