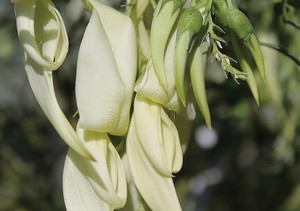 A native plant nursed back from the brink of extinction by Scion nursery staff was returned to iwi at an official ceremony in September. The rare white-flowered ngutukākā (kakabeak) was last seen growing in the wild in the 1950s near Wairoa on the North Island’s East Coast and was considered extinct. A chance discovery of a bag of seeds stored in a member of the public’s garden shed led to the plant’s recovery.

“We’ve been working with iwi, the Department of Conservation, Landcare Research, and the Ngutukākā Recovery Group to preserve these native plants, safeguarding their survival for future generations,” says Dr Brian Richardson, General Manager Forest Science. “Over the last four years our nursery staff have grown white ngutukākā from seed, applying their propagation expertise and increasing the likelihood of these plants surviving in their natural environment.”

Through genetic testing, the plant’s origins were traced back to the Wairoa region. Project Leader Karen Te Kani says, “The white ngutukākā is considered precious taonga to East Coast iwi. About 100 plants have been gifted back to Ngati Kohatu and Ngati Hinehika iwi to be planted on their ancestral land.

“A block of land surrounding Te Reinga marae at Wairoa has been fenced off to keep pests out, and we will also be guiding iwi on how best to ensure the plants survival.”

Ngutukākā is New Zealand’s most widely recognised endangered plant and was one of the earliest to receive conservation attention with DOC preparing a formal recovery plan in 1993. Plants are particularly at risk from browsing livestock and introduced forest pests such as rabbits and goats as well as deer and snails. Introduced invasive plant species such as buddleia and gorse also compete for the same forest environment.