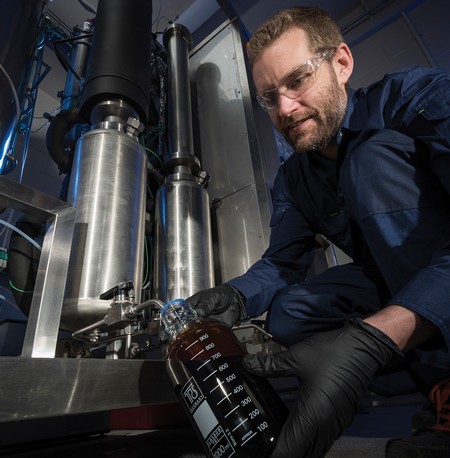 Scion has been involved in bioenergy and biofuels research for many years. With most of the country’s electricity derived from natural, renewable resources such as water, geothermal and wind, the focus of this work currently centres on liquid transport biofuels.

New Zealand’s transport sector is 99% dependent on fossil fuels, and responsible for 17% of the country’s carbon dioxide emissions. Most of the oil used to produce these transport fuels is imported.

“New Zealand currently imports about eight billion litres of oil a year, it’s our biggest import,” says Research Leader Dr Ian Suckling. “If we can replace some of this imported oil with locally produced ‘climate smart’ biofuels, it would significantly improve our balance of trade, and reduce our reliance on fossil fuels. It would also generate numerous business and employment opportunities for the regions.

“And the benefits for our environment would be immense - replacing fossil fuels with clean hydrocarbon biofuels would help lower greenhouse gas emissions.” This year Ian and his team of engineers, physicists and chemists have started using a newly acquired fast pyrolysis plant to convert wood into bio-oils. These oils can then be further refined into transport fuels or bio-chemicals.

The fast pyrolysis plant was designed and built by the University of Twente in the Netherlands, recognised leaders in pyrolysis research and development. It’s capable of converting 1 kg of wood each hour into about 750 mL of raw pyrolysis oil. The pyrolysis reactor vaporises small particles of wood by rapidly heating them to approximately 500°C in the absence of oxygen. The vapours are then quenched, producing the oil. The whole reaction and quenching takes place in seconds.

“We are focusing on developing pyrolysis to convert woody biomass directly to bio-oils,” says Ian. “These oils can then be upgraded to drop-in fuels that can be blended directly with fossil fuels.

“There is a lot of variation in wood and how it could be pre-treated before being put into fast pyrolysis. Each treatment might result in different qualities of bio-oil, which in turn, may affect its suitability for conversion into fuels.

“We analyse the characteristics of the bio-oils we produce, and we’re currently using the pyrolysis plant to trial various temperature settings, feedstocks and pre-treatments to identify the best combination for specific fuels.”

Ian says that while the pyrolysis of wood to oil is already at a commercial stage internationally for industrial energy and heating use, Scion’s research focuses on converting it to a transport fuel and generating New Zealand specific solutions.

“It’s technically challenging breaking down the cellulose, hemicelluloses and lignin components of woody biomass into a final fuel,” he says. “Conversion technologies tend to be complex and consequently have high capital and operational costs. The challenge is finding a technology to produce lignocellulosic biofuels cheaply and on a large scale; the next hurdle will be the availability of feedstock.”

The COP21 Paris Climate Agreement and Z Energy’s new biobased plant has stimulated increased interest in biofuels and their long-term role in the New Zealand economy. Ian sees the growing biofuel market as a huge business opportunity for New Zealand forestry. Of all possible biofuel sources in New Zealand, only our plantation forests are big enough to produce biomass on a scale to compete with the country’s thirst for 8 billion litres of liquid fuels a year.

Our research has already shown that approximately doubling our plantation forest area by planting a further 1.8 million hectares of forests would meet 60% of New Zealand’s liquid fuel requirements by 2035, as well as providing other benefits such as sequestering carbon, reducing erosion, improving water quality and reducing greenhouse gas emissions.

Locally produced liquid biofuels made from a renewable source, and that benefit the environment? Way to go!