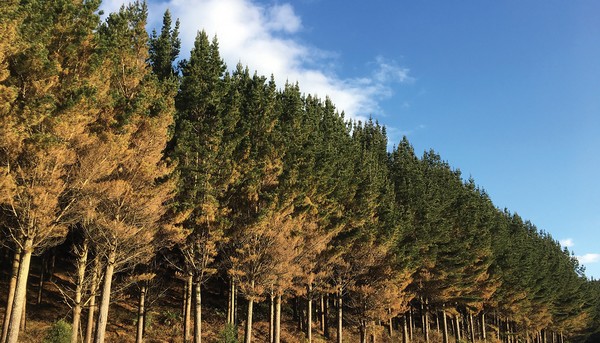 What is red needle cast?

Red needle cast (RNC) is a disease that infects pine trees and Douglas-fir needles. Infected needles turn yellow then red and are cast or blown off the trees a few months after symptoms appear.

It is caused by the algae-like organism Phytophthora pluvialis.

P. pluvialis is a native of North America where it affects Douglas-fir.

How does it spread?

P. pluvialis is carried in airborne water droplets. Wet, late summer conditions – mist, cloud and rain – are ideal for the disease to develop.

Wetter than normal conditions around the country have seen RNC appearing around the North Island in areas where it is not usually seen.

Is it a threat to our plantation forests?

The needle loss caused by RNC affects tree growth and can reduce it by up to 40 per cent if the defoliation is severe. However, because the disease tends to be sporadic and unpredictable, tree growth returns to normal after about three years.

P. pluvialis does not pose a direct threat to New Zealand’s log trade. The spores only affect live foliage and do not contaminate logs.

Is there a treatment?

Preventatively spraying pine plantations with copper in late summer or early autumn may be a way to manage RNC. (Copper sprays are already routinely used to control other needle diseases.)

Can you tell me more about Phytophthora?

Phytophthora literally means plant destroyer. Phytophthora species are responsible for serious plant diseases worldwide, such as the potato blight that caused the Irish famine (also known as the Great Hunger) in the mid-1850s.

What is Scion doing about Phytophthora diseases?

A collaborative research programme addressing the threat of Phytophthora species to New Zealand was established in 2013. The Healthy Trees, Healthy Future programme involves breeding, management and research approaches to combat Phytophthora diseases. The programme is led by Scion and runs to 2019.