In 2017, 2509 stink bugs were intercepted at the New Zealand border and last month Bay of Plenty students learned how to help stop the bugs from becoming established.

Stink bugs are one of the biggest threats to New Zealand’s kiwifruit industry, meaning it’s critical that all New Zealanders work together to keep them out. During a field trip to Trevelyan’s Pack and Cool in Te Puke, about 90 students took part in activities designed to teach them about the science behind protecting New Zealand’s primary industries such as kiwifruit production.

“Earlier in the year, the students received hands-on, House of Science pest management and biosecurity learning kits which they worked through in their classrooms, followed by a visit from Scion scientists,” Steve says.

“Bringing them out to a working pack-house and cool-store means they get to see how the science actually applies in real life.”

The students became ‘certified stink bug finders’ by searching for fake stink bugs in a kiwifruit orchard. They also learned the science behind spraying orchards to protect them from bugs, weed and disease, plus toured a pack-house to see how avocados are inspected and graded.

“We show them how science supports all aspects of the primary production process, plus the trip helped raise awareness of career options in the fruit industry, including scientific roles. We hope students will be inspired to consider science as a career to support New Zealand’s fruit growing industry.”

“The House of Science kits are just fantastic – they really engaged the kids. Once they were talking about it, their understanding of science just grew and grew.

“The second stage – when scientists visited the school – was absolutely brilliant. The kids learned how to identify trees and how diseases can affect them, and also what pests are bad for the environment. They’re much more conscious of pest bugs now.”

A total of 150 Kaitao Intermediate students took part in Creepy Crawlies and Taki says it has provided them with great experiences that may result in them considering a career in science.

“For our kids, anything to do with the environment is great for them and we’ve really loved learning through science. They’ve also learned that science isn’t just about the environment – it’s so broad and relates to pretty much everything, including how they prepare food and when they are playing.”

To find out more about how every New Zealander has a role to play in preventing pests and diseases from getting into Aotearoa, visit the Biosecurity NZ website Ko Tātou This is Us. 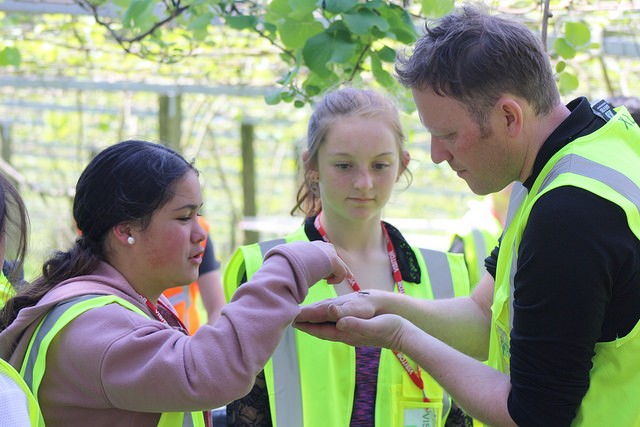