Scion scientists have been instrumental in developing and testing biodegradable nursery pots that will help nurseries and Kiwi gardeners to reduce plastic waste and its impact on the environment.

The biodegradable pots, made from biopolymers and a biofiller, will offer an alternative to the estimated 350 million plants in pots produced by New Zealand nurseries each year.

Manufacturing of the pots will scale up after production processes are finetuned using funding received from the Government’s Plastics Innovation Fund announced recently by Environment Minister David Parker. The pots are expected to be commercially available by September 2023.

The successful prototype, PolBionix, has been four years in development at Scion as part of a project with commercial client Wilson and Ross Limited. Director Peter Wilson engaged the services of Scion’s expert biomaterials and biodegradable testing team to develop and test a formulation for a product that meets the requirements of a nursery, last at least 12 months above ground then, after its planted in soil, continues to biodegrade. The pot then provides fertiliser for the plant as it breaks down, supporting plant growth.

Scientist and technical lead of Scion’s Biodegradation Testing Facility, Gerty Gielen, joined the project after the strong candidate was found. More in-depth analysis was then done using Scion’s accredited biodegradation testing facility, the only one of its kind in Australasia.

“Biodegradation is defined as the breakdown of material into carbon dioxide, water and microbial biomass. That’s what we were testing for in our facility that mimics typical conditions for home composting. We found one product responded very favourably after 12 months.”

Gielen says the results are extraordinary. “People have explored the idea of creating biodegradable plant pots for at least 10 years and many companies have given up along the way. There are so many formula combinations and permutations, so to discover a formula that works feels like winning the lottery.”

Barbier says the research is a perfect example of Scion’s scientific focus on helping New Zealand transition to a circular bioeconomy and be less reliant on products made from fossil fuel.

“The new product uses biopolymers made from sustainably grown sugarcane, cassava or corn. We combine that with a biofiller of waste organic matter. Diverting that waste into a product like this adds value in the manufacturing process, which is the circular bioeconomy in action.”

“Importantly, the end result are products that can reduce plastic pollution in New Zealand and carbon emissions.”

Scion’s scientific discovery during the testing phase has resulted in the filing of two international patents.

Wilson handles the commercialisation of the PolBionix-trademarked product, which can be produced using existing plastic injection moulding processes. The product can also be manufactured with thermoforming and film blown processes.

The biodegradable pots are currently being tested in three commercial nurseries. Auckland City Council has also trialled the planting of 100 PolBionix pots in Waitawa Regional Park. A further 100 pots were were planted in August at Anchorage Park School as part of Auckland’s Eastern Busway Infrastructure project.

In addition to significant private investment, funding support over the past four years of research has come from Callaghan Innovation, Auckland Council’s Waste Minimisation Fund and the Ministry for Primary Industries through its Sustainable Food and Fibre Futures fund.

Wilson is excited about the opportunities ahead for the product and its widespread adoption by nurseries, both for home gardeners and planners of large-scale infrastructure and environmental restoration projects, especially near waterways.

“Raw material costs for PolBionix are higher than for traditional fossil-based plastic pots, so PolBionix pots will be more expensive. However, there are costs saved by not having to add fertiliser, or face charges for disposing of the traditional pots in landfill. Any recycled pots currently need cleaning which adds a cost to nurseries. Planting should also be quicker, so there’s reduced labour costs for large-scale projects too.”

Long-term, Wilson is keen to explore other applications for the product across agriculture and horticulture.

“The problem of plastic pollution we face in New Zealand and, indeed, the world is significant. This project demonstrates Scion’s capability in helping solve these challenges. Their input has been invaluable to the success of this project.” 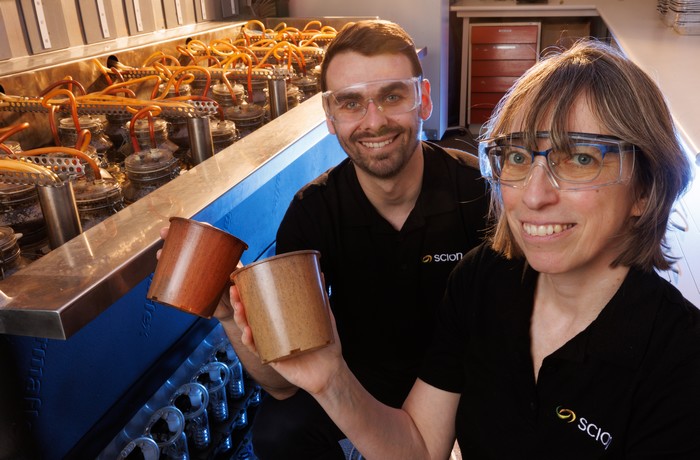