Annual report a song of success 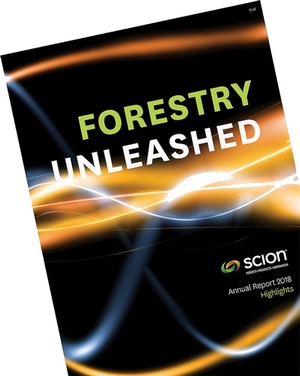 A milestone achievement was the completion of the world-first draft assembly of the radiata pine genome, which marked the beginning of a new era of precision forestry for this dominant plantation species.

In other work, Scion researchers found that optimising radiata pine stand density could increase the net value of the plantation estate by $1.7 billion. A newly developed model can predict the optimum final crop stand density for producing structural grade timber. The model will be released for use by forest owners and managers to plan targeted operations optimising stand density and maximising the value of their crop.

Biosecurity work was intense during the year with Scion involved in the myrtle rust incursion response both as leaders of specific projects and as collaborators in multi-disciplinary and multi-organisation programmes. We also continued to be a key player in the kauri dieback response via a highly collaborative research programme.

Scion’s launch of the New Zealand Biofuels Roadmap Summary Report in February by the Minister of Energy and Resources was successful in stimulating discussion on domestic large-scale production and use of liquid biofuels among major industry players and policy makers.

Scion’s complete Annual Report can be downloaded from www.scionresearch.com/annual-reports