Cellulose, a structural component in the primary cell wall of green plants, is the most common organic polymer on Earth.

Cellulose chains form crystalline fibrils a few nanometres in cross-section. The exact number of chains (and cross-section) is species dependent. The crystal cross-section of land-based plants can be up to five nanometres. In contrast, the cellulose crystals in seaweeds can be 20 nanometres or more across.

The width of cellulose crystals is known to affect heat transfer. Scion scientist Dr Stefan Hill wants to find out more about this relationship.

“Our hypothesis that the relationship will be linear,” says Stefan. “And that seaweed cellulose crystals will have a heat transfer rate that is at least twice as fast as currently reported celluloses.

“The first step is to extract cellulose from seaweed. Then we need characterise it physically, and finally test its thermal conductivity.
We are planning to use x-ray diffraction to work out the shape and size of the crystals. This will be done at the Australian Synchrotron. The synchrotron generates high energy electron beams that are shot at the sample. By looking at the way the beams are scattered when they hit the sample, it is possible to work out its structure.

The seaweed cellulose will then be incorporated into paper and plastic composites to evaluate its thermal properties.

Cellulose-containing components could be used in electronic applications like mobile phones where fast and effective heat transfer are essential, for example, rapidly cooling batteries to extend their life (and stop them catching in fire).

“Seaweed might seem a long way from New Zealand’s biggest source of cellulose – trees,” says Stefan, “But we will be using Scion’s experience in pulping, paper and plastic composites, and processing biomass.” 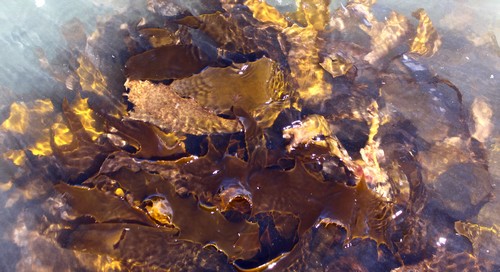