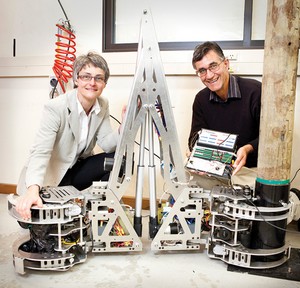 Drs Stefanie Gutschmidt and Richard Parker with the tree-to-tree robot.

Developer, Senior Scientist Dr Richard Parker, has been working on the project in partnership with the University of Canterbury. With guidance from Professor XiaoQi Chen and Dr Stefanie Gutschmidt, Richard co-supervised four engineering students from the university to design and create a working prototype of the device. The students George Wareing, Sean Bayley, Scott Paulin and Thomas Gilbert received the IPENZ Rey Meyer Medal in March for the project, which is awarded to an individual or group of engineering students for best final-year project.

The device has been designed to improve the safety of steepland forestry by providing a mobility platform that can eventually be used to perform tasks. “Our aim is to develop a whole family of tree-to-tree robots which can perform productive tasks in the forest, such as felling, pruning and measuring trees,” says Richard. “Humans will still need to oversee their operation and maintenance, but they will be able to do so at a safe distance from hazardous, steepland operations.”

The tree robot has been developed with funding from Scion, Future Forests Research and the Ministry for Primary Industries’ Primary Growth Partnership programme.