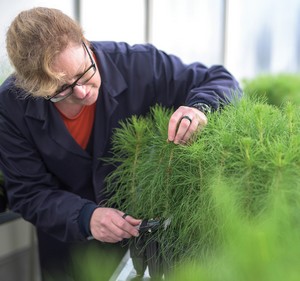 Plant science organisations all over the world will be celebrating the international Fascination of Plants Day on 18 May. This biennial event is set aside to recognise the value of plant science for producing food and non-food items like paper, timber, chemicals, energy and pharmaceuticals.

Dr Elspeth MacRae, General Manager Manufacturing and Bioproducts, is New Zealand’s representative on the European Plant Science Organisation, which co-ordinates the celebrations. “Plants are the basis of New Zealand’s world-leading food and beverage industry and it is plant raw material that underpins our up and coming biomaterials and bioproduct industries,” she says.

Scion will be celebrating Fascination of Plants Day by planting two tree species with unique stories of their own, the Wollemi pine and Gallipoli pine.

There are fossil records of the Wollemia genus that have been dated to 200 million years ago. But the first living specimens were not discovered until 1994, when a chance find by an abseiler led to the discovery of what is now known as the Wollemi pine. The species was named after the Wollemi National Park, north-west of Sydney where it was found.

In the years following the discovery, Scion propagated new seedlings through tissue culture, helping to secure the future of the Wollemi pine.

The Gallipoli pine to be planted is a descendant of the Gallipoli Peninsula’s Lone Pine. It is one of 50 trees grown by Scion from seeds that were collected in 2012 from the Turkish red pine (Pinus brutia) growing at Paeroa Golf Course (New Zealand). This tree is an authenticated New Zealand descendant of the original Lone Pine and traces back to a pine cone brought home by Australian soldier Sergeant Keith McDowell after World War 1. The remaining seedlings were gifted to RSAs nationwide in 2015.

Fascination of Plants Day is great opportunity to celebrate the unique history of these two species, and their long term survival thanks, in part, to the science Scion provided. The planting will be in conjunction with our 70th anniversary events.

For further information
on Fascination of Plants Day, visit www.plantday.org