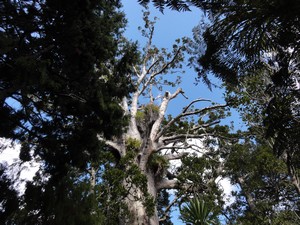 The graceful, iconic kauri, Agathis australis, comfortably placed in the top echelon of the world’s mightiest trees, is at risk of being toppled by a microscopic monster.

Kauri dieback, or Phytophthora taxon agathis (PTA), is a fungus-like disease in New Zealand that is attacking the roots of kauri, slowly destroying their ability to draw water and nutrients from the soil. The disease hits below the surface of the soil; once the trees show outward signs of the disease, it’s too late to save. However, work has shown the disease may be managed using chemical techniques.

“Kauri dieback is a devastating disease,’’ says forest pathologist Dr Peter Scott who is planning to screen trees for natural resistance. “It may potentially wipe out whole populations of kauri. Many infected trees have died and will likely die in the near future - thousands have succumbed in the past decade.

“Kauri is a cultural icon to many people and we consider it an honour to be involved in this project,” says Peter. “We’re looking for trees that show natural resistance so we can breed from them and eventually revegetate affected sites.

“Each population of kauri is distinct and some more susceptible to the disease than others. At this stage, we know little about the disease, or how long it takes for a tree to start showing signs of infection – in a tree that lives for over 1,000 years, it’s academic if it’s two or ten years. There may be one healthy looking tree in a population of sick trees, and the perception is that this tree is okay, however it may die in ten years’ time, we just don’t know. 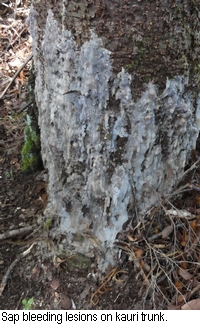 “The first signs of the disease are often bleeding lesions on the trunk, yellowing and thinning of the canopy and dead branches, but again, this can differ between sites. It’s just devastating seeing a 900 year old tree turn yellow and die.”

According to Peter, public perception will be vital to the success of the project. “It’s important for us to engage with the public on the severity of this disease and its implications, and we’re hosting a free public symposium in November to facilitate this. Because the disease is soil based, it can spread through the transfer of any organic matter – on people, bikes, through animals such as pigs, and the pig hunters themselves - even unwittingly by transferring plants, or any plant based organic matter from one location to another.”

In addition to kauri dieback disease, there are two other major Phytophthora diseases in New Zealand that have a serious impact on our primary industries – red needle cast of radiata pine, and crown and collar rots of apples. Worldwide, there are more than 120 species known to cause plant diseases. The Phytophthora fungi pose a huge global biosecurity challenge due to the range of plants they affect, their rapid global spread and devastating impact, and the high costs associated with managing them.

Scion has recently received $10 million funding from MBIE over six years, to help tackle the problem for New Zealand and lay the foundation for genus-wide management strategies. The project brings together Scion, Auckland Council, DOC, Landcare Research and international specialists, and will potentially see New Zealand become a world leader in the management of Phytophthora in trees.

“We need to tackle the issue from many different angles in order to manage the problem,” says Dr Nari Williams, forest pathologist and coordinator of the Phytopthora research project. “Scion is a leader in plant breeding, and this will play a key role in the Phytophthora research.

“Breeding lines of radiata pine, kauri and apples will be screened against a range of Phytophthora species. Susceptible and tolerant lines of each host plant will be selected and the interaction between these and the Phytophthora species characterised at a genetic and metabolic level. This information will help us understand the mechanisms of disease resistance and accelerate screening programmes against a range of pathogen attacks in each host so we can establish efficient controls.

As for our beloved kauri, Nari says it’s not just the trees themselves that we need to restore to good health – it’s a whole ecosystem.

“Kauri is a keystone species and so many other plants and wild life thrive within the kauri forests.”