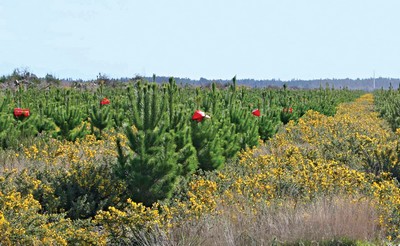 Good weed control during a forest’s early years is necessary for tree survival and growth, and ensures timber yield throughout the life of the stand.

Scion’s Weed Management Team is looking at ways to overcome some of the common weed problems faced by the forestry sector and its ‘licence to operate’ as certified by the Forest Stewardship Council is maintained.

The two most widely used herbicides in forestry are terbuthylazine and hexazinone, providing excellent control of major weeds. Both herbicides, however, are classified as hazardous by the Forest Stewardship Council (FSC) and forest growers are granted permission to use them under certain restrictions while further research is underway to find alternatives. Over the past two years, our research team has been trialling herbicide mixes that could potentially replace these herbicides.

“The use of terbuthylazine remains in question,” says Research Leader Carol Rolando. “But we are researching potential alternative herbicide options for the forest industry that will minimise off-site impacts of herbicides while maintaining productivity.”

The effects herbicides have on our environment

Forest harvest residues may play an important role in managing the risks associated with aerially applied herbicides, according to soil scientist Loretta Garrett.

The research team recently completed a two-year study on the environmental outcome of terbuthylazine and hexazinone on planted forests in Pumice soils, to investigate their behaviour in the soil and water and to ensure their continued use in FSC-certified forests. Results indicated the environment was most at risk on the actual day of spraying and the month following. After then, low amounts of the herbicide were found on site due to rapid degradation, posing little risk to the environment.

“These results highlight the importance of forest litter and the retention of harvest residue organic matter on site in retaining terbuthylazine and to some extent hexazinone, limiting its movement down the soil profile,” says Loretta. Other soil types likely to be vulnerable to leaching include Recent and Raw soils.

“The lack of information we have at this stage about how herbicides behave on other forest soils, or underlying site geology that may accelerate leaching, means there is still uncertainty about the risks these herbicides pose to the environment without further research.”

Controlling the spread of wildings

Scion is actively seeking ways to control the spread of wilding conifers. Wildings are a major threat to biological  conservation within New Zealand, currently covering about 500,000 hectares from the central North Island to the South Island high-country. Many of these species were actively planted for erosion control. Those considered wildings are Pinus contorta, P. nigra, P. sylvestris, P. mugo, P. pinaster, P. radiata, Larix decidua and Pseudotsuga menziesii.

“Wildings grow in dense stands that have no economic value and reduce productivity of managed pasture, displace native biodiversity and alter the character of the landscape,” says Carol Rolando. “Their impacts on productive land and on conservation values are well documented but control programmes present a number of challenges. As well as the sheer scale of the problem, some affected areas are remote and difficult to access, making it dangerous and costly to control. We are working to find effective, alternative herbicide treatments to control wilding infestations, as well as developing application techniques to minimise spray drift onto surrounding vegetation.

“We’re also progressing a treatment and delivery system to kill isolated, scattered individual trees in remote and difficult to reach locations. Future research will probably focus on locating isolated wildings using remote sensing which will greatly reduce the costs of the current search and destroy method.”