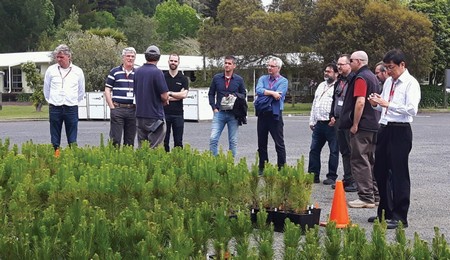 Members of the Task 34 group enjoy a tour of Scion.

For one week in early November, Scion hosted the world’s foremost bioenergy experts in Rotorua for the latest round of International Energy Association (IEA) Bioenergy meetings.

Hosting events under the IEA Bioenergy banner in Rotorua is a significant step for New Zealand. Although biofuels are a drop in the ocean of our fuel consumption - accounting for less than 0.1% of the annual 8.6 billion litres of fuel consumed here annually - bringing together bioenergy’s most influential and intelligent minds shows we are in the major league on this issue.

IEA Bioenergy is an international organisation created to improve cooperation and information exchange between participating countries, with an aim to increase global uptake of bioenergy. It is where the world’s leading scientists and policy makers can come together to work on tasks, or streams of work, that contribute to bioenergy research, development and usage around the world.

New Zealand is a member of IEA Bioenergy with a place on the executive committee, and staff from Scion represent New Zealand on Tasks 34 (Direct Thermochemical Liquefaction, Ferran de Miguel Mercader) and 39 (Commercialising Conventional and Advanced Liquid Biofuels from Biomass, Ian Suckling) with the other world leaders in those fields.

While the work of those tasks is very specific, the overall benefit is consistent – sharing information on joint projects. By virtue of being part of these tasks, we learn from other member countries that have gone further down the track in deploying bioenergy than New Zealand has.

Focussing on marine and aviation

Marine and aviation biofuels were the hot topic of the week. These sectors don’t have the option of electric powered motors like cars – if they’re going to reduce their reliance on fossil fuels – biofuel is one of few options available.

Rather than a traditional meeting of researchers, the IEA workshop on drop-in biofuels for international marine and aviation markets workshop brought together the different parties involved in the process. Officials from Boeing, Air NZ, Interislander, Ports of Auckland and Z Energy were among the speakers.

Scion Science Leader and workshop organiser Paul Bennett says, “It seems logical to get all the parties in the same room talking to one another, learning about the barriers to deployment of these fuels. By having everyone there, we were able to get the whole picture of what’s happening around the world and insights into what needs to happen here in New Zealand.”

The driver for aviation drop-in biofuels is through the international market. In October 2016 the International Civil Aviation Organisation, which the New Zealand Civil Aviation Authority is a member of, announced an agreement to cap the global net CO emissions from international aviation at 2020 levels. Paul says, “Initially offsetting (such as afforestation) will be used to address the target but in the longer term using biofuels will be an enormous leap toward the aviation industry achieving their goal of carbon neutral growth from 2020”.

The maritime sector is in a somewhat different predicament. Their heavier fuels emit sulphur, which affects air quality in ports and has become a real issue in some areas. Paul says, “There has been some international movement toward setting a limit on sulphur levels – and if that happens, it will have a huge effect here. If the ships leaving our ports carrying our exports don’t meet the standards of the destination ort, they won’t be permitted to enter”.

Paul says the industry pressure is mounting, and we need to stay at the forefront of science on this issue. “It’s not a question of whether or not we pursue biofuels, it’s how we do it in the best way for New Zealand”.

Plotting our future in biofuels

Second generation biofuels have come a long way. Researchers at Scion are working on a bioenergy roadmap to plot out the course for biofuels to enter our market. The IEA Bioenergy forums can help us to determine which biofuels would work best here, based on what other countries are doing. After all, doing nothing is not an option for us.

New Zealand’s export economy relies on fuel for aircraft and ships to get goods and tourists in and out of the country. Right now, maritime and aviation industries are dependent on fossil fuels, but they are international industries looking for a change. If we’re not ready to respond with options, the future could get a lot smaller for New Zealand.