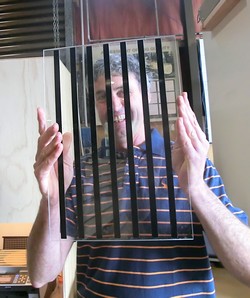 An accidental breakthrough with a piece of wood and a flatbed scanner could lead to huge savings for the timber industry.

Warped timber adds costs to the wood-processing industry and can undermine the reputation of timber as a reliable building product. Spiral grain is the biggest culprit behind this problem.

A spiral grain wraps around a log like the stripes on a barber pole rather than being aligned perfectly up and down. During drying, spiral grain leads to shrinkage and warping of timber, a major issue for many softwood species, including radiata pine.

Dr Keith Mackie, from industry-led Solid Wood Innovation, says segregation of potentially inferior material as early as possible in the processing sequence would save drying costs on inferior timber. It would deliver a more consistent quality timber product to the building and construction industry.

Measuring spiral grain has proven to be both tricky and expensive. An “accidental breakthrough” by Scion scientist Mark Riddell may soon change that.

Just before heading home one evening, Mark decided to scan a dry disc of wood on a flatbed scanner, hoping to generate a decent image of split lines. The 20mm (about thumb width) thick piece was labelled on the top-side with a thick marker pen.  Surprisingly, the scan detected the label on the top side of the disk. After checking the disk was label side up and not label side down, Mark grabbed a fresh disc and drew a straight line across the top face and scanned it. The line appeared in the scanned image, but an S-shaped kinking was apparent.

Mark believed that the kinks were due to light being deflected through the wood along the path of the grain, and if a spiral grain exists, this path will be at an angle rather than vertical.

Following further research, Mark and his colleagues have developed a reliable method for producing 2D maps of spiral grain in discs of wood up to 35mm in thickness. They published their findings in the International Association of Wood Anatomists Journal. The approach was also presented at a recent conference in Portugal, where it sparked considerable interest and also won Mark the Future Forests Research Award for Science of International Quality 2012.

This technology may become the gold standard for assessing spiral grain with work progressing towards larger scale automated grain assessment. The data produced by this method will ultimately be used to  reduce issues associated with timber warping. 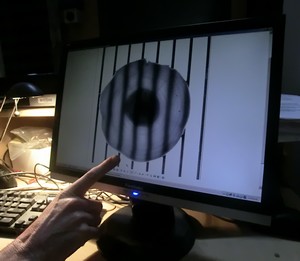