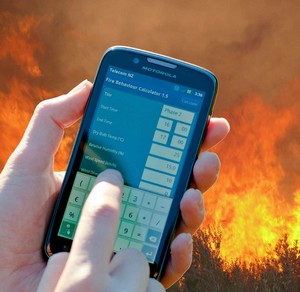 Whenever a fire breaks out, people reach for their phones. Thanks to a smartphone app developed by Scion’s rural fire research team, phones can be used for more than just ringing 111. Fire managers can use their phone to help fight the fire.

This app allows fire managers to input wind speed, relative humidity, slope, and other factors into their phone. The software then calculates how hot and how fast a fire is likely to spread in different vegetation types.

Senior fire researcher, Grant Pearce says that firefighters love this idea, because it reduces the amount of gear they need to carry around in an emergency.

“They’ve got all the information they need in their pocket at all times,” he says.

This app is based on 20 years of research into how fire is likely to behave in New Zealand conditions. Data collected from experimental burns and wildfires were used to develop tools that help fire managers to make decisions about how best to tackle any given fire.

“These tools started out as paper-based lookup tables and field manuals. Over time, we evolved these into software applications, which are now used widely by fire managers,” Grant explains.

Fire managers can use the software to calculate a fire’s rate of spread, its intensity, flame length and a whole lot of other useful measures for fire fighting purposes. This information is calculated using inputs such as wind speed, relative humidity and slope.

“Now this software is available for smartphones, we can potentially have access to it at all times,” he says.

Training sessions for the app have been provided to rural firefighters in the Greater Wellington region and Manawatu, with more sessions in the pipeline as other regions get connected.

The development of an Apple-based app is now under way, following completion of the android version.

Development of this smart phone app was funded by the Forest and Rural Fire Association of New Zealand (FRFANZ), with production of the underlying fire behaviour models funded by the Ministry of Business, Innovation and Employment (MBIE) and rural fire end-user organisations.